What explains the drop in UK banks?

One surprise of 2022 is the weak performance of UK banks. Bank profits were expected to be helped by i) rising global interest rates and ii) ECL (estimated credit loss) provision release. However, these tailwind factors have not worked out and iii) geopolitics has got in the way. Let us look at the details.

i) Investors have now grasped that near zero rates, the governing monetary policy framework since 2009 is no longer appropriate. Global interest rates must rise to dampen runaway inflation and restore central bank credibility. Central banks are perceived as ‘behind the curve’, late in addressing this issue. Adding to upwards pressure on global interest rates is the US Federal Reserve’s ‘quantitative tightening’ QT plans ($47.5bn market order pcm starting in June 2022) to sell US Treasuries / RMBS to a skittish market. Rising rates should improve bank profits, not so? 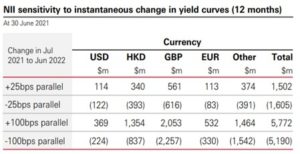 Barclays says a 25 basis point move up (0.25%) adds £275m to net interest income over the first 12 months. The reason for the increased uplift in later years is the expiry of forward rate hedge positions.

However, it is important to differentiate this profit guidance on the sensitivity of net income to “instantaneous change in yield curves” to the rate environment more broadly. This refers to fact that in making these net interest income sensitivity calculations banks have assumed an upwards shift in the yield curve (rising rates) only.

An upwards shift in the yield curve has occurred but alongside ‘yield curve flattening’ i.e. the spread between the long and short dated bonds reducing, which is negative as banks borrow ‘short term’ and lend ‘long term’. Yield flattening (as below) reduces rate spreads and net interest income.

Yield flattening over the last 11 months, has possibly run its course however will depend on the trajectory of interest rate increases.

The UK bank sector has started hiking lending rates on unsecured lending (PL’s, cards, overdrafts) and mortgages, but are dragging their feet on deposit rate hikes. This should help the UK sector generate higher margins from their core retail businesses.

However due to higher inflation/ higher interest rates/ geopolitical problems, a far more cautious approach has prevailed. The UK banks added to ECL provisions over Q1 2022 except NatWest which reported a small ECL release, contrary to expectations at the start of 2022.

iii) Geopolitics in 2022 cannot be understated. Post extensive sanctions on Russia, that rendered Russian assets in the hands of overseas investors worthless, there is a reappraisal of emerging markets investments in particular in ‘Big Brother’ authoritarian / totalitarian regimes (i.e. Turkey, Saudi Arabia, Kazakhstan, Egypt, Israel, China, Singapore) where property/ investor rights can be trampled on, where protest is stifled etc. In this post war divide, many of these countries have sided with Russia. China publicly said it will stand by Russia calling Vladimir Putin ‘its best friend’.

Quite a few companies are in the geopolitical headlights due to substantial global footprints. Amongst UK financials are HSBC and Standard Chartered – companies riding both horses of Western liquidity / regulatory oversight / capital markets as well as China growth. If geopolitical problems intensify this strategy will become unsustainable. Short term investors are repricing China related earnings.

It is said the HSBC board are worried about the risk to their HK banking licence being suddenly revoked or altered. Threats were made last year when HSBC dragged its feet on freezing HK demonstrators’ bank accounts. HSBC caved in and followed Beijing’s instructions, responding that had to follow “local banking regulations”. However, the incident demonstrated HSBC’s vulnerability, its subservience, the fact it facilitated Beijing intimidation of demonstrators, depositors’ money was subject to government interference.

Prudential plc which pivoted to Asia, over the last three years has lost 50% since the strategy to exit UK and US completed last November. This is largely due to the lack of investor confidence in Prudential’s China focus. Investing in Prudential is now tantamount to a partnership with Beijing. This is a radically new trajectory that UK investors have mixed feelings about, and rightly so.

A wider question is whether globalization linked strategies where companies’ productive capacity is based in the east and sold in the west can still be relied on (though I will save that for a future day).

Geopolitics should not hurt Barclays, Lloyds or NatWest given their footprint.

UK banks have been counterintuitive – rate hikes have not helped, ECL releases have run their course and geopolitics has got in the way. Investors are also concerned about the fixed cost base and wage inflation factors. However the sell-off still appears overdone. We would urge holders not to panic and suspect the banking sector will stabilise soon.