Sanctions v Russia, will they work?

Western government sanctions against Russia coupled with vast private sector sanctions are unprecedented. The sanctions are targeting the Russian Achilles heel, its pygmy economy, (amounting to the size of Netherlands + Belgium in GDP terms) that sells energy only and is highly import dependent.

The list below gives a snapshot of private sector closures just 2 weeks after the war started. 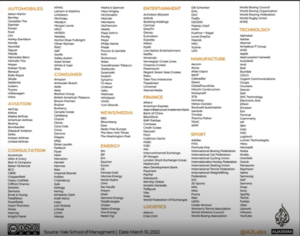 The goals of global sanctions appear to be :-

Recent events remind me of 2002, when it became clear that Iraqi regime change was the true objective of the Bush Administration, not weapons inspections or Iraqi military containment or UN sanctions. I suspect the same is true today of the Biden Administration. However, Biden realizes the US approach cannot involve the US military directly.

The United States recognizes that Ukraine’s duly elected government should have the right to decide, (preferably with popular consent) if it wants to join NATO or the European Union, or any other international club, regardless of Russia’s viewpoint. This was the view at the 2008 NATO Summit and it remains the case today. The Ukraine government’s freedom of choice is the point of principle. Whether or not Ukraine is actually admitted to NATO or the EU or in what timeframe is another question, but that is almost beside the point.

Since February 24th 2022 it has become apparent that Russia has taken a course of action that, left unchecked and unopposed would create serious upending of the world order, create c.10m-20m refugees and encourage further Russian annexation/seizure of countries in its ‘backyard’. At the same time confidence has grown in Ukraine’s ability to resist occupation and mount a sufficient counter offensive that will stop Putin’s acquisition plans. It is possible that the Russian armed forces will be defeated in the Ukraine which will destabilize Moscow.

It is also likely post the Bucha massacre, that further global sanctions and prohibitions, trade measures will be taken to block Russian oil, gas, steel, coal. But historical evidence suggests sanctions are a very blunt instrument that are far more likely to fail than succeed :-

I am not saying sanctions are the wrong approach, they must be applied. However their track record is poor regardless of the circumstances. But against Russia, sanctions have been far more extensive and will hurt. The global response and quick alienation of the Russian economy has been so extensive that the continued operation of a failing military campaign seems like a bad option. However Putin is unlikely to be swayed by sanctions and could seek to escalate tensions via a number of nasty military options.

A great deal depends on continued Ukrainian military advances, and its access to US spy satellite data, Turkish drones and French surface to air missile supplies. So far, Ukraine’s military efforts have greatly surpassed expectations. But there must be far greater Russian public unrest than so far to sway Putin. How long will Russians tolerate economic hardship and 20% mortgage rates? Some dictators have survived sanctions for years, with public support, the Castro’s for example.

There has been normalization in the last month with UK blue chips trending upwards recouping their losses, despite the geopolitical context, higher interest rates and a cost of living problem. It is tempting to say the geopolitical problem is well understood and priced in. The move in the VIX (the US volatility index) is a telling sign of a calming down process in US assets, as well. This is normally positive for US blue chips. 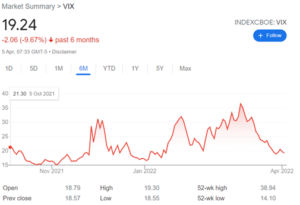 In my first article on this subject, I said the risk of conflict was 50:50 – the aim of investment research is not to predict warfare (I do not suggest a military expertise) it is hopefully to say yes there is a high risk of conflict, which was highlighted. Geopolitical risks remain high but their impact is increasingly localised. German blue chips for example have remained weak, and have not recouped their losses, due to recession risks being more elevated from energy disruptions. 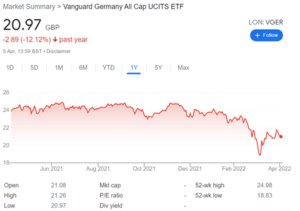 Overall I am more confident of improving equity market fundamentals over Q2 with a view to adding the laggards.