Home › Market News › Research & Analysis › Russia/Ukraine – How much of a problem is this?

Russia/Ukraine – How much of a problem is this?

Russian military movements and war mongering has been ratcheted up in recent weeks leading to diplomatic initiatives aimed at stalling military action.

As has been pointed out by many Ukrainians, both covert and overt Russian military activity has been ongoing in their country for over a decade now. There were Russian snipers in Maidan Square firing on protestors in 2014 deliberately provoking rioting and police/ army brutality. It failed to prevent the Russian backed government of Viktor Yanukovych falling in the 2014 Ukrainian Revolution.

The conflict then moved to eastern Ukraine where the more Russian centric population helped to support a semi-covert military engagement “War in Donbas” between Ukrainian forces and Russian ‘spetsnaz’ – special commando forces, whose stupidity resulted in the downing of the Malaysian Airlines flight 17 and other atrocities that Russia has never had the spine to come clean about.

The Russian military has already seized parts of the Ukraine – the 2014 seizure of the Crimea is proof of this fact. Since seizing the Crimea, Russia has reinforced its military presence on the Black Sea region a potential hot spot, given its NATO contingent of Romania, Bulgaria and Turkey.

Russia has made clear it wants security assurances that NATO will not permit Ukraine or Georgia to join NATO and come under the US defence shield. NATO has said that the Ukraine has the right to determine its own path.

But most important, timing wise, Vladimir Putin must have concluded that timing is opportune, post the US withdrawal from Afghanistan.

What is the US position?

Post the US withdrawal and failure in Afghanistan, some have argued if the 1969 Nixon doctrine still holds? Broadly this way of thinking about US foreign policy has informed US foreign military involvement for decades. Broadly the Nixon doctrine holds:-

Let’s consider this point by point:-

The US does have a bilateral investment treaty with the Ukraine but is not militarily obliged directly or via NATO. In March 2018 NATO added the Ukraine to its list of ‘aspiring members’ where it remains today. Hence no military treaty exists either between the US or via NATO in respect of Ukraine. The US considers Ukraine a “partner” country which amounts to a statement of friendship.

The Ukraine cannot be said to be vital to US security – neither could Kuwait – however Ukraine’s case is especially weak given the lack of US intervention when Russia seized the Crimea.

On the final point if the US provided US soldiers to Ukraine, such a move would mean direct superpower confrontation.

The US has always recognized the implicit need for superpowers to look after their own ‘backyard’. Presidents Nixon, Reagan and Bush senior adhered to this thinking. The Ukraine is viewed as part of Russia’s ‘backyard’.

Furthermore, there are important military constraints, how would the US or NATO be able to provide meaningful military support to Ukraine, given the lack of sea access. Adding all this up, we conclude that the US / NATO is very unlikely to be militarily involved in the event of a Russia/ Ukraine conflict.

The US, NATO allies and EU are left with more punitive economic sanctions, the Gazprom pipeline, reinforcing NATO defences in Poland and the Baltics, and financial options aimed at clamping down on Moscow’s elite, freezing overseas bank accounts and assets, blocking travel, sending diplomats home.

What is the likely market response to a Russian military invasion of the Ukraine?

In previous conflicts, such as the US led Gulf Wars in 1991 and in 2003, the immediate reaction was a surge in crude oil prices and a US market retreat. After Iraq invaded Kuwait in July 1990, US blue chips fell about 18% between July to mid October 1990. In the run up to the second Iraq war, from January 1st 2002 to October 9th 2002, US blue chips fell 27.3%. Part of the reason for the magnitude of both drops was the onset of US recessions.

It is tempting to consider comparisons with previous periods of Russian aggression. Looking specifically at Q1 2014, the Crimea annexation, global equities still ended Q1 2014 with gains, MSCI World +1.4% with US equities +1.81% with EU shares shining +3.71%. The only market that saw major losses with Tokyo, and that was primarily due to weak China data and sharply appreciating Yen over Q1 2014. In fact Q1 2014 is a good example of Tokyo’s ability to do its own thing. 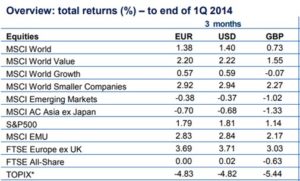 No two periods are the same, and I would caution against over generalisation however the data from 2014 shows that only emerging markets were sensitive to Russia/ Ukraine.

Frankly, crude oil tells a similar tale, only on occasions of US military action, and in the run-up to that action are there oil price surges and volatile periods that correspond broadly to the length of the military action. 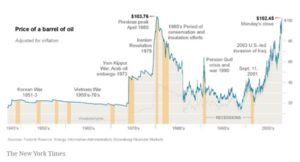 I hate to say this, but these days, factors impacting global markets tend to consist solely of factors impactful to the largest economies/ trading blocks. The question is, is the issue a major problem for i) the USA (GDP $21trn) ii) China/ Japan (GDP $20trn) or iii) the EU (GDP $17trn) – and if the answer is the issue is not a problem for any one of these three – then it is unlikely to impact global markets. In crude terms, Russia (GDP $1.4trn) / Ukraine (GDP $155bn) looks far too small to impact global markets.

That said, the high valuation of US equities makes them sensitive to new problems, short term. A new problem though, tends to be rapidly priced in.

The current tensions require an understanding of “Kremlinology”. This is partially an exercise mind reading former spymaster Vladimir Putin and calls for an appreciation of Russian thinking, the dark arts of the “Moscow Rules”. Some of these 1. “Assume nothing” 7. “Lull them into a sense of complacency” 9. “Pick the time and place for action” 10. “Keep your options open” seem relevant.

In the past Putin has tended to move against militarily strategic assets or threats. On this point Ukraine is not strategic, not in the way of countries like Poland or the Baltics. The vast expanse of Ukraine, its mainly agricultural economy that struggles to pay its bills, its pro-EU west would be an ongoing headache. The Russian oil and gas wealth would have to be shared if Russia seized the Ukraine.

The disconnect is Russia remains a military superpower but an economic pygmy. The C-19 pandemic entailed more caution amongst government leaders and an inward focus. Can Russia afford a foreign adventure post the pandemic? Putin will consider the impact of fresh economic sanctions, a likely collapsing rouble and the willingness of its citizens to take on more hardship. In my view an actual Russian military incursion is a 50:50 scenario.

If a Russian invasion happens there may well be an adverse short-term response, a bad week, however when viewed over a quarterly period, it could well be insufficient to impact global markets. Reading the 2014 Q12 Schroders investor bulletin the Crimea annexation seemed almost a foot note.

Still let’s hope calmer heads prevail, the problem solves itself and lives are saved not lost.