Home › Market News › Research & Analysis › Inflation…where is it coming from?

Inflation…where is it coming from?

Over 2021, inflation has returned. But so far, central banks and governments have dismissed the issue as temporary, blaming C-19. Is this inflation prognosis credible?

Inflation is a marathon not a sprint. In the 1960’s, President Johnson’s Great Society legislation, Medicare, Medicaid, the US/ USSR arms/ space race escalation, the Vietnam War were all one-off expenditures unfunded by extra taxes. Substantial new debt was created. When inflation started to rise in 1969 it unleashed pressures in the US financial system that resulted in higher US interest rates, withdrawal from the gold standard / US dollar devaluation, and a decade of high inflation helped along by oil price hikes.

The parallels today are obvious, the vast cost of C-19 has not been funded by extra taxes anywhere….yet. The World Bank estimates global government debt increased by 13% of global GDP in 2020 to 97% – a record level. Due to its role in deflating the real value of money, inflation is a friend of debtors. 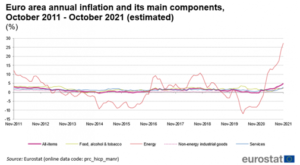 Eurozone inflation and German inflation (5.2%; November 2021 – a 29 year high) has surged from their 2019 levels of 1.35%. Germany, an anti-inflation bastion is a litmus test, if high inflation happens in Germany, then it is prevalent elsewhere. However the ECB has been most vocal in resisting calls for a change in monetary policy.

Both US and UK inflationary trends show an inflationary spike underway that is moving up at nearly a 90⁰ angle. Economists have pointed to rising energy prices, input costs and ongoing C-19 pandemic expenses as Q1 2022 factors.

If we assume the inflationary spike has been triggered by the ramifications of the C-19 pandemic, to what extent are these effects likely to be more permanent than temporary? Will they have a life of their own going forward, like the 1970s.

Natural gas prices have been volatile in the EU/ UK which is dependent on Russian supplies. International sanctions against Russia could stop Gazprom’s NordStream 2 pipeline lifting natgas prices for a considerable time. Recent inventory drawdowns seem linked to milder weather, however declining North Sea field output and higher corporate demand over 2022 is likely to keep prices high. The demise of coal in the energy mix has been beneficial for gas.

The next Ofgem review in April 2022 will be key with some forecasters expecting a 30% hike in the energy price cap. The need for consumer prices to re-adjust to market realities was made clear by the recent bankruptcy of Bulb Energy which has left the taxpayer to fund a £1.7bn bailout.

Crude oil prices have proved sensitive to C-19 re-opening and crude demand globally is expected to recover to 2019 levels in 2022 c. 99.5m bbls. The strong demand picture has not been altered by the Biden Administration’s co-ordination of a global release of strategic oil reserves or high OPEC production or rising electric vehicle market share.

Recent oil industry commentary that the green transition has resulted in a decline in oil & gas investment is prescient. The short run effect of clean energy has been to delay or cancel new fossil fuel energy supplies and ensured the industry is more reliant on old, depleting fields. This suggests the energy transition from fossil fuels will be difficult. Price volatility could become a permanent feature as the energy mix moves in favour of cleaner, energy supplies.

Overall high demand for energy/ natgas/ crude oil and pricing strength looks due to structural, at least semi-permanent factors not temporary ones.

Normally I am skeptical of wage inflation driving short term inflation, due to the time lag effect of costs rising far quicker than salaries. It can take 6 – 18 months for an inflation linked pay rise to come through, which is scant comfort when bills went up last week. Globally in many industrial sectors, pay has significantly lagged costs, and assets in this century.

But as recent ONS data shows – pay inflation over 2021has taken a complete pendulum swing, from negative (-1.3%) to positive (+5.8%) – so pay packets have been catching up. There is new momentum. 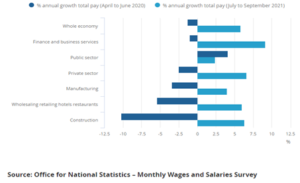 The furlough programmes adopted in the UK/ EU protected the unemployment rate by keeping people technically employed in their jobs on statutory pay rates and not looking for work. Unemployment did not rise by as much as initially forecast given the loss of GDP. As businesses re-opened, they did so in a higher cost/ inflationary environment which resulted in pay negotiations/ higher pay awards.

However higher tax rates in 2022 (+1.25%) in April 2022, higher council taxes and a more competitive labour market are counterweight factors – overall, given its weak track record, wage growth looks like a temporary factor.

Small ‘local community’ businesses, hairdressers, restaurants, convenience stores, pubs were the worst hit during C-19 as shops closed or had restrictions limiting trade. The net effect of the closures, notwithstanding the supportive actions of governments, was these businesses suddenly took on significant debt with lower cash and shakier asset values.

Within weeks of C-19 lockdowns, many small businesses were operating close to their financial limits. When they re-opened, the survivors had to increase prices regardless. A significant re-pricing of local services took place that normally would have spread over years. C-19 by causing smaller businesses to fail has reduced competition, which is inflationary. A re-pricing of this nature is a response to a one-off shock event and temporary.

The Road Haulage Association (RHA) estimates there is a UK shortage of 100k drivers resulting in recent pay awards hikes ranging from 20%-40%.

There is evidence that insofar as large economies are concerned, these significant short-run supply effects tend to resolve themselves. There will be only short term disruption, until a rebalancing arrives via resources re-directed to the shortage.

The HGV driver shortage is a staffing problem that will be resolved with increased training and recruitment and increased pay but not overnight of course. A global shortage of shipping containers or DRAM semiconductors or a blocked Suez Canal are likewise fixable problems. Whilst I accept that damage was done to global supply chains, this is transitory and temporary.

Quantitative easing, i.e. electronic money creation by global central banks, colloquially called ‘printing money’ has been contentious since its debut in 2009. Back then QE cash was used to purchase government bonds, mainly held by banks and financial institutions, the argument was made that it was technical and impacted the financial system mainly, with little real economy impact.

In the last decade, further supportive derivative arguments have stated that QE to the extent it does impact the real economy produces ‘good inflation’ i.e. higher bond and property prices and not ‘bad inflation’ i.e. cost increases.

Money created, cannot be destroyed. It is naïve to assume QE money does not enter the real economy or if it does, it only plays a beneficial role. Since 2009 it has become clear that QE by lowering interest rates reduces the cost of debt service increasing asset values, encouraging excessive debt accumulation which can be destabilizing. QE has also been blamed for increasing wealth gaps, societal / generational problems notably pushing up property prices to levels unaffordable for younger people.

There is a persuasive ‘moral hazard’ argument, the belief mainly held by politicians, that governments can run excessive deficits indefinitely. This debatable pleasant fiction holds that QE cash will provide central bank purchasers for government debt if/ when market demand dries up. Annual multi-trillion dollar deficits since 2008 is proof that fiscal permissiveness has taken hold in the political psyche.

“Blessed are the young, for they inherit the national debt”; President Hoover.

According to the global QE tracker website, staggering sums of money, around $9.1trn has been created since C-19 by the big four central banks with $14.1trn created since 2014. 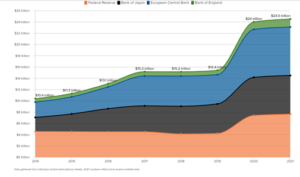 By not impacting all money supply measures, and not being represented in inflation gauges it is easy to overlook QE as an inflation source. It is tempting to think that QE in post 2008 period was more acceptable and harmless and primarily a means of remedying financial system imbalances.

However recent QE is more ‘real economy’ in nature – the new money created has seeped in via furlough schemes, tax cuts and deferrals, loans, cash handouts aimed at smoothing C-19’s impact. Recent QE has boosted asset prices, ‘good inflation’ as it did in 2009-2014, but this time ‘bad inflation’ has also quickly resulted. On this basis, the two QE periods can be differentiated.

Should these be equally weighted? That’s another article!

So whilst there are five possible inflation sources, three of them are temporary and two permanent. This suggests that inflation should subside possibly over 2022. The question arises, how long can central banks maintain credibility given their entrenched position that inflation is caused by temporary factors and will abate. Six months, maybe.