Global tech rout; where next?

Nasdaq sell off, it has happened

Tesla/Twitter and Netflix – the tale of 3 tech companies

One of the US tech sector’s foibles is it creates ‘superman’ personas along with ‘personality cult’ support structures, devotees whose belief system holds that ‘superman’ does no wrong. This creates large valuation premiums and lasting anomalies linked to both the persona and cult. But 2022 is all about ‘hubris’, who bears the risk of superman’s whims? What happens when ‘superman’ makes a mistake? or is hostile to his cults’ vested interests? What if any, are the coping mechanisms? 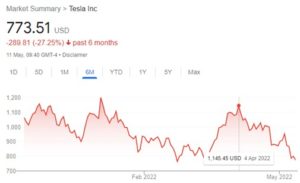 Elon Musk part funded the Twitter leveraged buy-out (LBO) using Telsa share sale proceeds- precipitating a 32.4% drop in Tesla shares. Did Tesla devotees deserve this? It was Musk’s second overtly hostile act in 12 months. Over 2021 Musk sold 20.7m Tesla shares for $16.4bn (c. 5m shares were gifted) but due to a 22.8m Tesla share option award ($6.24 per share strike price) Musk ended 2021 with 2.1m Tesla shares more than he started. This is tapping shareholders at its finest. Their coping mechanism has been to ‘sell’ Tesla.

Why, given rising competitor EV challenges, has Musk opted for a new headache in a new industry? Twitter’s structural problems will be worse with $16bn of new LBO debt v $6bn net cash now. Twitter is not generating the cashflow to support high debt. Musk’s plan is back of the envelope stuff. He wants to increase the tweet word limit and move Twitter onto a subscription business, despite c. 17% of Twitter’s 397m free users being willing to pay. A loss of subscribers would hit Twitter’s $5.5bn- $6bn advertising revenues. The Twitter LBO has raised questions about Musk’s weak M&A deal logic. Some suspect this is an expensive publicity stunt and Musk will abort Twitter soon.

Tesla’s valuation at 105x P/E is still high against peers (Volkswagen AG 4.9x P/E) who are adding EV to their fleets and catching up. Tesla has cutting edge autonomous driving technology that has yet to be monetized. However investors need to price in that Musk’s 17% stake will be mortgaged against Twitter, and his reputation has suffered. Will his cult following evaporate some more? The complexities have multiplied, so it is possible.

Streaming linked companies have de-rated considerably with market leader Netflix hardest hit. During Q1 the board lost c. 1% of the subscriber base. Whilst not catastrophic, the guidance is for further subscriber losses due to price hike linked cancellations. With $17bn in off balance sheet debt linked to program funding, the company is devising strategies to introduce advertising, cut spending, and tackle password sharing. 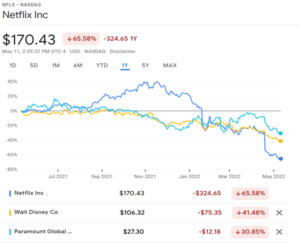 Global tech is being re-priced, with persistent ‘ratcheting down’ and no signs yet of capitulation or stabilisation. This suggests investors remain weary of ‘falling knives’ and Q2 updates. Given the size of the tech sector, relative to alternatives, we are concerned about larger declines ahead. We do not expect improved economic nor geopolitical news soon. We suggest investors focus on ‘value’, low multiple stocks for now.