Recent events have shifted the spotlight onto China’s murky and autocratic government policies and away from the glowing economic statistics of the last two decades. China’s crushing of HK’s democratic traditions, its imprisonment of over 1m Uighurs in concentration camps, its ongoing covering up of the cause of C-19, its military posturing against Taiwan is disturbing.

There is “Kremlinology” at work, trying to interpret and second guess the People’s Republic of China’s (PRC) next move. Regardless of the West’s understanding, or lack thereof, there is more scrutiny which implies less trust.

A major focal point for investor scrutiny is the Chinese ADR (American Depositary Receipt) legal structure currently used as the vehicle for US, UK and EU investment in major Chinese companies. Concerns over Chinese ADRs partly explains the massive sell-off in Chinese ADRs in 2021 such as Ali Baba ADR (NYSE; BABA) below. 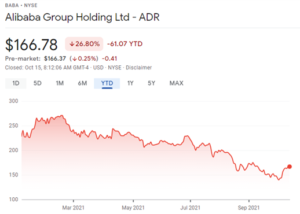 The chief of the US Securities & Exchange Commission (SEC), Gary Gensler, says he is worried that US investors have not grasped Chinese ADR risks. The SEC has been very vocal on this point.

Part of the problem is the use of ADRs, a well understood financial instrument, as a vehicle for Chinese investment.

Typically, an ADR is a straightforward share that represents direct ownership of other shares. ADRs enable a US based investors to buy/sell shares in a non-US company, that is settled on US exchanges in US dollars. It allows a non-US company to raise money in New York, broaden its investor base and obtain a US listing. An ADR represents a specific number of shares – i.e. Barclays ADRs traded on the NYSE, represent 4 Barclays ordinary shares traded in London. The foreign shares underlying the ADR are typically held by a US custodian.

Chinese companies have been raising funds from US investors using ADRs that give ownership only of Cayman Islands based shell companies. They are not allowed to provide direct or indirect equity ownership of the Chinese operating business. These shell companies have contracts with a Chinese holding company that in turn have contracts with the Chinese operating company. These contracts purport to give rights to ADR holders via the Cayman Islands listed company such as powers of attorney, equity pledge agreements, business co-operation, exclusive corporate services but not ownership.

The China based company is often structured as a variable interest entity (VIE) whose operations are consolidated in the financial statements prepared by the US listed company. Due to the presentation of its accounts and financial statements on a consolidated basis, investors are left with the impression that these companies are the same company despite this not being the case in fact.

China has long refused to allow proper audit controls, a factor that makes a mockery of financial account consolidation. China has prevented companies from sharing the work of their auditors with the US Public Co Accounting Oversight Board. The audit issue is important because without an independent audit, investors cannot verify or adequately probe financial statements.

The SEC has also reminded investors of the fragile nature of the legal relationship between Chinese ADRs (American Depositary Receipts) and the operating company in China. In a series of excellent disclosures this year, SEC chief Gary Gensler has highlighted once more the fact that, unlike other ADRs, buying Chinese ADRs in New York does not represent the purchase of underlying equity ownership in the Chinese company. 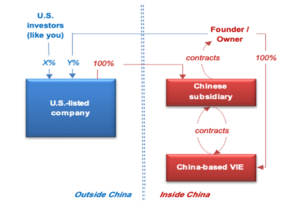 “If either the China-based company (or its officers, directors, or Chinese equity owners) breach those contracts with the U.S.-listed shell company, or Chinese law changes in a way that affects the enforceability of these arrangements, or those contracts are otherwise not enforceable under Chinese law, U.S. investors may suffer significant losses with little or no recourse available.”

In the above corporate structure, if the US listed company lost all value, wiping out the ADRs, the founder/ owner would still own the operating company and would have collected cash from US investors. The founder/ owner has no downside. Obviously there is something very wrong about one group of shareholders having all the downside whilst the other group has none.

The SEC also highlighted that foreign ownership of Chinese companies is not legally permitted by the PRC government for the vast majority of its companies, nor has it specifically approved of the use of ADRs to circumvent China’s legal restrictions on ownership. The PRC government likely therefore considers itself a free agent.

This is tangibly different to other totalitarian regimes. In Russia for example, the government does give its formal blessing to foreign companies partnerships/ JVs with/ Russian companies and it allows minority ownership via joint stock entities. The Russian government has tended not to get involved in disputes between Russian companies and their JV partners. Russia has at times encouraged foreign shareholders and its companies have invested abroad.

In fairness to the PRC government, it is under no duty of care, or fiduciary duty in respect of Chinese ADR holders. It never has been, nor has it pretended to be, acting in a supervisory capacity in respect of the legal structures created by Wall Street lawyers. The PRC can act quickly, without consultation or preparation, in respect of regulation to shareholders’ detriment. But it is entitled to do so, and it considers its hands are untied.

This is partly due to the Chinese concept of private enterprise. The PRC government considers business owners as ‘franchise owners’ i.e. having the right to run the business, collect revenues, pay taxes and dividends for an indefinite time, or until the government steps in to alter the franchise owners, which it is entitled to do. This is radically different to the western concept of equity ownership which cannot ordinarily be seized by the government.

It is hard to read the SEC’s comments without coming away with profound concerns.

Secondly, how can anyone value shares that lack any precise equity content?

Thirdly the SEC’s efforts with other US regulators to bring Chinese companies nearer to a corporate governance regime with effective risk disclosure have been fruitless. The regulator is under pressure to finalise rules on the delisting of Chinese companies that are not compliant with US auditing requirements. This could be a first step towards the delisting of Chinese ADRs from the NYSE.

Whilst I don’t have answers to this problem, I am compelled to conclude:-