Welcome to this week’s version of The CSS Weekly Review 7th March, these weekly reviews will run in tandem with the Stockmarket Newsletter at the start of the week. It provides you with a clear picture of what to expect in the week ahead, alongside a covering review of last week’s major news and economic factors.

Last week’s movement in the UK100 has seen most of the losses for the year being erased and showing a big beat on the Non-Farm Payrolls, as discussed below. Given the movement in the UK 100 and European Bourses the markets will watch with great interest when Mario Draghi, the ECB President, speaks on Thursday. Please see the price action chart below where you can click to enlarge the image. 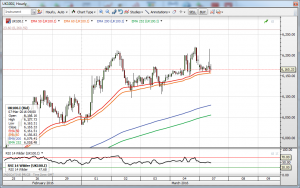 U.S. employment gains surged in February, the clearest sign yet of labor market strength that could further ease fears the economy was heading into recession and allow the Federal Reserve to gradually raise interest rates this year.

Nonfarm payrolls increased by 242,000 jobs last month and 30,000 more jobs were added in December and January than previously reported, the Labor Department said on Friday. The unemployment rate held at an eight-year low of 4.9 percent even as more people piled into the labor market.

“Despite panic on Wall Street about impending recession, Main Street goes about its business as usual. This report will get the Fed’s attention, and raises the odds of another rate hike before too long,” said Scott Anderson, chief economist at Bank of the West in San Francisco.

The only blemish in the report was a three-cent drop in average hourly earnings, which in part reflected a calendar quirk and the proliferation of low-paying retail and restaurant jobs. The average length of the workweek also fell last month.

Barclays Plc will sell its Africa business as part of a plan by new Chief Executive Jes Staley to simplify the bank’s structure and seek higher shareholder returns, it said after reporting a 2 percent profit drop and slashing its dividend.

The British lender plans to sell its 62 percent stake in Barclays Africa Group over the next two to three years, ending its presence on the continent after more than a century and becoming a “transatlantic” bank focused on the United States and Britain.

It would then concentrate on two divisions, Barclays UK and Barclays Corporate and International, to comply with ring-fencing regulations aimed at safeguarding its retail banking business from riskier operations.

The bank said it was cutting its dividend to 3 pence per share from 2016 from 6.5p in 2015, a move Staley said would help Barclays maintain capital levels while it disposes of unwanted assets. Its shares fell as much as 10.5 percent on Tuesday before recovering slightly to be down 9 percent by 1530 GMT.

Sales at Costa Coffee, which has previously delivered robust growth to Whitbread, edged up 0.5% in the last quarter, against a 3% growth expected.

In the 50 weeks to 11 February, sales at Costa increased 3% like-for-like, while Premier Inn revenue climbed 4.4%. Overall like-for-like sales edged up by 3.2%.

The results are especially disappointing for new chief executive Alison Brittain, who took over in December but started her tenure by having to report disappointing third-quarter results at the end of 2015

The owner of the Elephant and Diamond brands said it will give staff free shares worth a total of £3,600 each under an employee share scheme based on the results.

The group also hiked its total dividend for shareholders to 114.4p from 98.4p and announced a special dividend of 29.8p per share.

The payout boost came after the Cardiff-based group posted pretax profits of £377million for 2015, up 6 per cent on the previous year, and ahead of consensus forecasts for £350million.

What’s going to be a watch-point this week?

SIR PHILIP GREEN faces paying tens of millions of pounds into BHS’s pension fund one year after selling the struggling store chain for £1.

The billionaire owner of Arcadia Group is understood to have offered about £80m to help ease the scheme’s deficit after pressure from the Pensions Regulator and the Pension Protection Fund (PPF). They have yet to accept the offer and negotiations are continuing, according to sources.

The development is acutely embarrassing for Green. “This deal is coming back to bite [him],” said John Ralfe, an independent pensions expert. “He was wrong to think that by selling BHS he was, with one bound, free of its huge pension problems.”

FINANCIAL giant Old Mutual is finalising secret plans to break itself apart after receiving a takeover approach for its wealth management arm.

Buyout firms Cinven and Warburg Pincus are said to have tabled a bid worth several billion pounds for Old Mutual Wealth. The division includes investment manager Quilter Cheviot and its funds business, which is home to renowned stock picker Richard Buxton.

The approach, first reported by Sky News, could herald a break-up of Old Mutual. It was founded in Cape Town in 1845 and now spans Africa, America and Europe.

The shares closed at 179.7p last week, giving the company a market value of almost £9bn. Many bankers think it would be worth more if broken up, as there is little overlap between between its disparate divisions.

In addition to its prized UK wealth business, Old Mutual has a large stake in Nedbank, one of South Africa’s biggest lenders, an emerging markets division and an international asset management business.

Pru and Aviva to raise payouts

Insurance giants Prudential and Aviva are set to boost shareholder payouts after a jump in profits. Aviva is expected to report earnings of £2.5bn on Thursday, up 15% from last year’s £2.2bn. Prudential’s profits are forecast to rise to £3.6bn, an increase of 13% on last year’s £3.2bn. It is anticipated that the Pru’s dividend will climb by 3p to 40p, while Aviva is forecast to bump up its payout by 3p to 21p. The insurers will also disclose the size of their capital buffers under new European rules designed to safeguard the industry in a severe financial crisis.

What companies are reporting this week?

It looks like the week ahead could be an interesting one, how will the financial sector perform?

Unsure of what some of the topics mean here? Call one of our helpful team of Account Executives who can help to explain the content on 0207 2642 360.

We hope you found our Week Review and Week Advance useful and as mentioned before, if you feel we can improve on these reviews or anything you want to see, please comment below!

Connect with CSS Investments on LinkedIn