“When China Sneezes, The World Freezes”

It was naïve to expect 2016 to alter anything. In January 2016 liquidity has returned and investor focus has narrowed onto three major issues:-

Whilst the vagaries of the Shanghai indices (75% retail), mean it is excluded from MSCI World indices, this does not stop global investor concern over Chinese growth. Since its stimulus packages over 2008/2009, Chinese end demand for retail goods, commodities, heavy machinery, aircraft has propped up global growth. The issue now, is Chinese demand there, or partly there? The broad slump in commodity prices suggests end demand is the issue. China is c.50% of global demand for metallurgical coal and copper.

The true state of the Chinese economy is unknown. Many observers disagree with the official data pointing to China’s reported GDP growth rate of 6.9% (Q3 2015). Some suggest growth is nearer 3% than 6%.

Many question the Communist leadership’s crisis management. The circuit breakers, intended to reduce volatility had the reverse effect. The practice of spiriting away wealthy Chinese for interrogation for days provide insight into the repression and paranoia that is never far away.

B) OPEC :- When crude oil started falling in June 2014, the Saudi/ Gulf Arab block within OPEC were convinced low prices would bring supply/ demand back into equilibrium (where supply = demand). This is right longer term. However the first order effect is that supply increases as sellers try to meet revenue targets. This adds to the global oil inventory (of c. 2bn barrels) hence a vicious down spiral.

The subsequent price collapse has left OPEC dysfunctional and unable to agree a production ceiling. This allows OPEC to increase supply. The hope is demand will rise but this is again a long term prospect. Demand growth is unlikely to match supply growth if consumers in emerging markets reduce spending. A very ugly scenario is underway at the moment. Crude oil at $30/bbl endangers producers, oil service companies, government revenues. It will mean petro sensitive sovereign wealth funds withdraw funds from equity markets. Should crude oil remain at $30 a number of countries will be heading to the IMF.

C) Emerging markets; a period of adjustment is under way in BRIC and ““N11” (“next 11 countries”) due to the commodities slump, unstable local currencies and the Asian slowdown. Geopolitical tensions have not helped. Maybe the adjustment will be softened by an export recovery and the US recovery.

So far world indices have declined c.10% year to date so this is a “correction”. It is a rather indiscriminate global markdown with a high correlation between markets, suggesting common concerns exist about corporate profits and valuations.

Revenues/ profits, “Brexit” and US election will arrive in 2016

The outlook for UK corporate profit is mixed and industry specific – some sectors are facing pressure on revenues and EPS. Our research sampled 23 blue chip and mid cap UK co’s drawn from a mix of Leisure, Transport, Property, Banks, Oil & Gas & Mining companies. The specific companies sampled are not relevant, the point being to locate the broad trend.

There was a wide dispersion of revenue growth and EPS growth at the interim stage. The scatter diagram also shows the trend lines (“the line of best fit”) which indicate for those sampled that both revenue and EPS are trending lower. 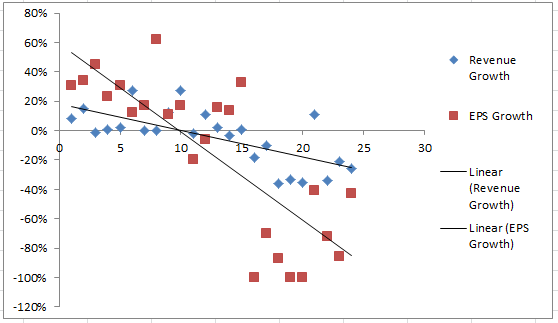 The data suggests the market has been efficient in marking down equities for fundamental reasons. UK blue chips are off 18.4% since record levels in 2015 – valuation wise the index is c.16x PE. There has been a large 7.2% “correction” in equities since New Year’s Eve.

2016 is going to be busy. The UK government is preparing for a summer referendum on EU membership. We see the result as highly dependent on the campaigns. We suspect a Conservative led “in” campaign will be half hearted which could leave the vote open. Frankly a vote to leave will be negative for sterling, UK equities, bond yields and UK asset prices.

The 2016 US Presidential election is odd. “The Donald” has created chaos in the Republican camp ahead of the Iowa vote. The odds of a Republican victory increase the longer Trump remains in the race. The likely outcome at this stage is a Clinton victory. This would see a return to the prudent policies of the 1990s alongside pharmaceutical reform. An end to unregulated US drug pricing has major implications for pharmaceutical profits. There is also the well-known Clinton disdain for vast military spending / US overseas adventures for defence investors to consider.

The sell-off suggests 2016 EPS forecasts are being adjusted. Investors are starting 2016 with lower expectations, hence are less susceptible to downside shocks. The collapse of crude oil has brought issues into focus quickly, which is positive. It is likely the Federal Reserve will remain “patient”. The US earnings season has so far shown profits holding up.

The People’s Bank of China should provide further monetary stimulus and a cheaper Yuan adding to deflationary forces by lowering manufacturing costs. This could stabilise commodity prices as will the inevitable “care and maintenance” plans for major base metal projects.

During the Blitz the slogan was “Keep Calm and Carry On”- our broad view remains to not panic. We accept conditions are poor, we cannot see a short term positive catalyst we could be at these levels for a little while. Nevertheless we do not advise broad portfolio reallocations.