Scotland’s future will be decided on the 18th September

Ahead of the September 18th referendum, recent polls have agreed that the momentum is with the SNP.

The quality of the debate has been weak. Business leaders have claimed to have been pressurised by the Nationalists to stay out of the debate and quiet on the risks. The SNP claimed they had legal advice supporting their thinking about Scotland’s position in the EU before it was revealed they had not received legal advice.

The details and fine print about future pensions, currency, share of the national debt, central bank/ central bank reserves, fiscal policy have not been credibly answered by the SNP. The SNP claim an independent Scotland would be able to use sterling notwithstanding the explicit rejection of this notion from all three major Westminster parties. This is understandable. No-one knows the precise answers now and everyone is flying blind on the details if the answer is “Yes”.

What is clear Scotland would have to reapply for EU membership, negotiate their accession, and joining the EU would involve a unanimous vote of approval from EU member states. When Commission President Jose Barroso made the legal reference points clear, the SNP claimed he was talking “nonsense”. The SNP has now picked up on the complexity of the EU issue apparently via press comment. 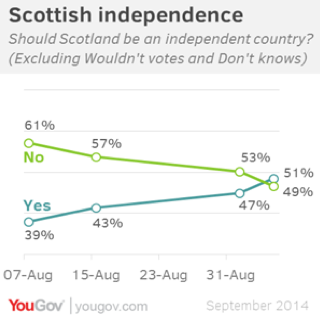 In the end the referendum vote is an emotional decision for most voters – many of whom will be younger voters less concerned about the economic factors. It is a chance for change and it will be meaningful change. The result will depend on the floating voter and is likely to be very close.

However it would introduce a lengthy period of uncertainty as key issues were decided.

Key areas of negotiation/ uncertainty that would influence the sovereign debt rating of the UK and Scotland:-

A “No” vote would preserve the status quo with the carrot being the provisions of the Scotland Act 2012 adding powers to the Scottish Parliament including the ability to raise/ lower income tax by 10p, control of stamp duty and landfill tax and the creation of Revenue Scotland – a tax authority to replace the HMRC. Assuming the No vote wins the reward with be greater devolution of power to the Scottish parliament.

What sectors would be impacted ahead of separation?

A “Yes” vote would have the largest short-term impact on the Fund Management and Utilities sectors though this will abate over 2014/15 as key uncertainties are clarified.

What companies would be impacted ahead of separation?

In reviewing the impact on relevant listed blue chip companies, it is apparent that the Scottish referendum is a major issue for 2014/ 2015 in the event of a vote in favour of independence. That impact would abate over time as key uncertainties are clarified. Companies can mitigate their exposure, move their HQs and engage in tax arbitrage.

Possible approaches in the run-up to the 18th September 2014

With just 10 days to go……the Scottish referendum looks like a binary bet. Our expectations for the immediate run up period are as follows:-

Our expectation is the period in the run-up to the vote will be very volatile, poll sensitive and with heightened political risks.