The Trump Tapes & the Clinton dividend 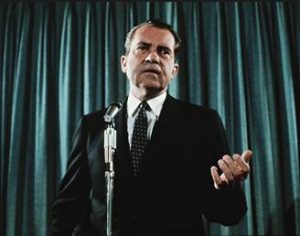 There are parallels in this eerily familiar American tale involving the collapse of political credibility simultaneously amongst the population within the Republican Party and arguably globally.

The noise from this weekend was a Godzilla-esque roaring entry. The Trump Tapes were possibly the defining moment of 2016 when reality caught up with illusion and spin.

Many Americans have bought into the Trump façade of a maverick outsider taking on the Washington establishment. This is easier to believe in the media’s digital age of split second content delivery, hyped TV ads, social media traffic, email/ internet advertising, celebrity endorsements and billion dollar media distribution deals.

But all of that counted for nought on Friday. Good old fashioned tape recordings delivered the incredible undiluted truth.

Forty two years ago the taped Watergate revelations and the fight to keep them out of the public domain substantially contributed to the collapse of the Nixon Administration – the first time a sitting president had been forced to resign.

If Miss Universe and the first Clinton debate was the “Iron Mike” shock combination punch, the Trump tapes are the political equivalent of the Tyson upper cut KO. But unlike boxing, the damage was self-inflicted. For the entire campaign, the Clinton camp has said little, Trump has gone out and hung himself all on his own. 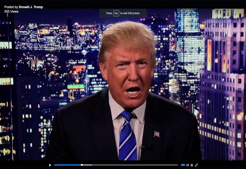 Donald Trump’s tapes were the property of NBC Universal, made on their premises, voluntarily for the broadcasters’ consumption.

Both tapes show the highly damaging nature of recorded commentary. In both cases protagonists reveal character. These are not conversations and prepared debates that are in any way manipulated. There is no stress or provocation or external pressure. Other people are heard making irrelevant one liners. What comes across are the protagonists’ totally unprompted speeches, boasts and candid, sordid ramblings. Ultimately their character flaws are delivered in a relaxed private environment where they alone are in the driving seat.

The Nixon tapes detailed a potty mouthed President, scheming and plotting his next step. Nixon’s significant achievements and foreign policy brilliance contrasted with his domestic paranoia and “enemies lists”.

This tape corroborates straight from the horse’s mouth the experience of abusive behaviour detailed by former Miss Universe, Alicia Machado just a fortnight ago.

But Trump is relying on the Republican Party infrastructure, he has not bothered setting up his own offices in swing states. This means that loss of support amongst Republican party officials will filter directly down to the vote on November 8th. Senior Republicans have deserted Trump and he is now turning on them, calling their departures “cowardice”. Party chairman Reince Preibus has cancelled meetings with Donald Trump and started to distance himself as have other key Republican leaders in swing states.

“RINO” – “Republican in name only” – is a derogatory 1990’s acronym that is made to order for Donald Trump. The party had worried about taking on such a celebrity outsider but will now carry the can and the fallout from the inevitable loss.

Why didn’t the Republicans kick Trump into touch in the early stages? He had bragged about changing party allegiance three times in 14 years. Far from shaking up the Washington establishment, he will leave the Republican party in the political wilderness for years to come.

The Presidential election looks much less of a risk now. Indeed it would seem impossible that Trump can win from this position, more likely is a Clinton landslide victory.

It is worth rehashing the outstanding performance of US asset prices and US equities under President Bill Clinton (1993-2001) whose fiscal approach (a balanced budget) is remarkably similar to Hillary’s approach to the US economy.

The 1990s were helped by prudent US government policies and a productivity boom driven by IT and software adoption.

What is striking about the current period is the United States is coming off a long period of GDP growth following a financial crisis in 2008/2009 – this is not dissimilar to the situation in 1993 which had seen a lengthy period of economic expansion in the 1980s.

Hillary Clinton has a five point plan to meet the challenges created by structural and generational change notably:-

Current S&P P/E levels (24.9x PE) are not far from 1993 levels before the very strong bull run of the mid to late 1990s. On the flip side the US has taken on significant debt since 2001. At the end of the US tax year on May 4th 2016 it stood at $19.4 trillion – having almost doubled from the $10 trillion level at the start of the Obama Presidency in 2009. The current US Administration has not taken the opportunity of addressing US overspending – arguably this will have to be tackled by the Clintons.

However they are the best people to take this job again. Bill balanced the books in 1998 and was running down the national debt the year after. He had taken a significant risk in 1993 to raise taxation but his legacy of fiscal prudence made this worthwhile.

Hillary Clinton brings an experienced pair of hands to the Presidency. It is vital that she wins on November 8th.

As such we do not see the US Presidential election as a major risk factor. US stocks are likely to be well supported in the run up and during November.