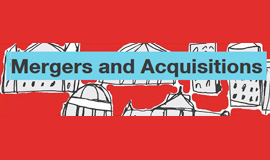 ARM Holdings (ARM) – agreed deal with SoftBank for £17 per share the buyout took place at a 43% premium to the undisturbed share price. ARM received the largest acquisition premium in the UK IT sector since Hewlett Packard bought Autonomy in 2011. The deal appeared motivated by the fact that Masayoshi Son, SoftBank founder and CEO held ARM in “high regard” as opposed to any immediate industrial logic of the combination.

Of equal note was the buyout financing. Mizuho Bank lined up a $9.4bn bridging loan for SoftBank. The global banks are providing billions in highly competitive leveraged loan financing capacity for M&A opportunities.

MicroFocus (MCRO) – the agreed merger with Hewlett Packard Enterprise Software unites MicroFocus with the former Autonomy (acquired by HP in 2011). The merger is structured almost as a merger of equals with HPE shareholders owning 50.1% of the enlarged group alongside two pre-merger cash distributions worth $2.9bn. The deal is a good example of a transatlantic deal that aims for global reach in key software technologies.

Premier Farnell (PFL) – Avnet stepped in with an offer of 185p cash per share trumping an earlier offer of 165p from Datwyler by 12%. The takeover is a substantial premium to the 100p-110p level at the start of 2016.

SAB Miller (SAB) – the offer was raised from £44 per share cash to £45 due to the drop in sterling making SAB a cheaper acquisition for US based AB InBev. The deal should close on time on 10th October 2016.

William Hill (WMH) – although the Rank/ 888 Holdings consortium failed in its attempt to even get the William Hill board to the negotiating table, the move was expected to attract alternative offers. Those unfortunately did not materialise leaving William Hill to conclude, rightly in our view, that both consortium parties (each of which are about 1/3rd of the size of Hill) would be unable to offer the sort of premium required. Furthermore the structure of the offer would leave the enlarged group highly leveraged post deal a problem in the highly regulated gaming industry. We were pleased William Hill kicked the Rank/888 offer into touch, we would prefer a combination with Paddy Power.

We see several common “threads” with the large M&A to date:-

Carpetright is a leading specialist floor coverings and bed retailer. Founded in 1988 the business operates in the UK, Netherlands, Belgium and Eire primarily via a store network comprising 435 UK outlets and 137 in its EU territories. The board are in the midst of a UK store refurbishment plan covering 100 of its UK stores costing £10m over 2016/17 to counter competitive pressures from Tapi, a new concept store with 51 UK outlets. Carpetright axed its dividend in 2012 to fund a store rollout programme but this year, the board reversed course and closed 43 underperforming stores. The board has cut debt to sub £1m making Carpetright an easier acquisition for a competitor. In our view this is a possibility given the recent Brexit sell off has seen renewed concerns over the impact of the sterling devaluation on the home furnishings sector. Investors are arguably overlooking the potential for further consolidation.

Vertu is the UK’s 6th largest autodealer formed in late 2006 to acquire and consolidate within the motor dealership sector. In 2007 Vertu acquired Bristol Street Motors (the 13th largest UK dealer). Vertu has since grown via a multi franchise model from 105 of its 127 dealerships with most major marques- the recent outlet growth rate is c. 10% pa. Vertu also offers considerable aftersales activities comprising servicing, parts and accident repair centres. Further consolidation amongst UK autodealers is possible given Vertu’s smaller market share relative to larger players such as Pendragon, Sytner, Lookers, Inchcape and Arnold Clark. The recent drop in market capitalisation to just £197m throws up value pointers (Vertu Motors valuation is c. 8% sales and below net assets per share of 58p).

When considering our M&A “school of thought” bear in mind:-