SNB Move off The Peg

SNB move off the peg “Francogeddon!”

The Swiss National Bank is “discontinuing the minimum exchange rate of CHF 1.2 per euro and lowering the interest rate on sight deposit account balances that exceed a given exemption threshold by 0.5% to -0.75%”.

“The minimum exchange rate was introduced during a period of exceptional overvaluation of the Swiss franc and an extremely high level of uncertainty[…]this exceptional and temporary measure protected the Swiss economy from serious harm[…]Recently divergences between the monetary policies of the major currency areas have increased significantly – a trend that is likely to become even more pronounced […]The SNB will continue to take account of the exchange rate situation in formulating its monetary policy in the future”. 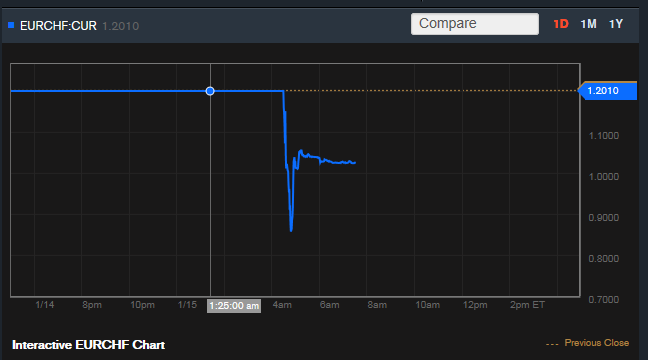 Swiss equities tumbled 10% in immediate response with UBS and Credit Suisse both losing 14% whilst Cartier fell 17%. 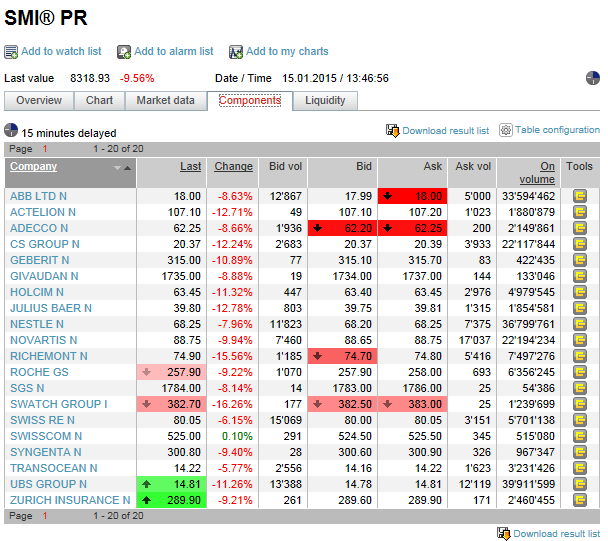 Denmark a close analogy is next focus

The Danish Krone has been active on speculation that its situation is nearly analogous. Denmark maintains a peg rate of DKK 7.46/EUR via a negative interest rate of -0.1%. The central bank is likely to be under pressure to clarify its stance post the Swiss move. Large currency inflows into DKK are certainly possible if the central bank stays quiet.

2015 has had a volatile start so far. As of last night the driver was declining commodity prices / speculation of ECB quantitative easing but today currencies have taken centre stage. The ECB has fuelled speculation of QE primarily as a means of lowering the value of the Euro – the single currency has declined to near record lows without any official comment from the ECB that might infer it was displeased with the Euro sell off. The Swiss move has helped a fresh decline today and the ECB has said….nothing.

The return of the Swiss Franc to its previous safe haven status should be welcomed by investors with hard assets in Geneva and Zurich, especially property assets, though it is possible that changes in disclosure laws in recent years has led to some reticence.