Bank of England signaled that interest rate rises were very likely soon, given inflation exceeding the target rate of 2% and continued GDP expansion. 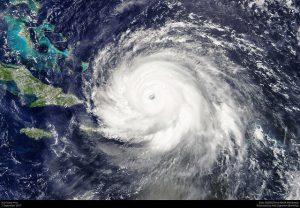 Hurricane Irma missed Miami and high insurance density areas on the eastern US panhandle and had diminished considerably by the time it hit Tampa. The US was spared the devastation caused in the Caribbean and Cuba. Shares in leading reinsurers rallied strongly in response.

US Federal Reserve plans to start monthly bond sales with the intention of reducing its bond holdings “quantitative tightening”. US chair Janet Yellen suggested the Federal funds rate would be lifted again in 2017 with further hikes in 2018.

EU chief negotiator Michel Barnier claimed the UK/EU talks had yet to make “sufficient progress” in key areas of the UK withdrawal process.

PM Theresa May ahead of the Conservative Party conference has insisted she is leading from the front on Brexit, despite public interventions by the Foreign Secretary.

Moody’s downgraded the UK from Aa1 to Aa2 citing a weakening in public finances and increased UK government spending in a number of areas.

Governor Mark Carney has updated guidance on monetary policy shifting expectations over September. Investors now expect a 0.25% hike to 0.5% in November 2017 with two further 0.25% hikes in 2018. Whilst the Bank has toyed with rate expectations before, notably in 2015 and then not delivered a hike, should it repeat this behavior again, its credibility would be at risk. It should lift rates in November.

The direct result of the Bank’s revised guidance has been a boost to sterling which has more conviction than the four “failed rallies” since June 2016. The GDP read for Q2 at 0.3% suggests a 1.5% annual growth rate.

Rumours that founder Peter Wood is actively marketing his 30.77% Esure stake has fuelled takeover speculation. The “Sheila’s Wheels” company has struggled since its IPO in 2013 at 290p per share. Should Mr Wood find a buyer for the entire stake it would trigger an offer for minorities.

Tokyo equities performed strongly post the move by PM Shinzo Abe to call a snap general election for October 22nd. The move, prompted by Abe’s hard line on the North Korean crisis and another stimulus package was viewed as positive for investors. According to the Nikkei newspaper 44% of voters back Abe’s LDP with a poll suggesting only 8% support for the main opposition Democratic party.

The exporters were also helped by a weaker Yen which depreciated to Y113/ USD over September. 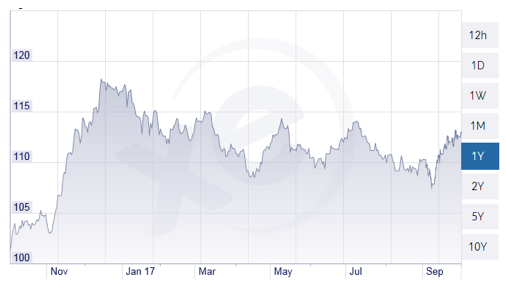 The re-election of Chancellor Merkel for a fourth term was bittersweet as it was accompanied by the entry of the populist “AfD” a broad political consortium of anti-immigration/ Far right / Eurosceptic/ anti-open border. The AfD’s 13% of the national vote weakened the Merkel consensus and it the first sign of worker discontent despite the strong performance of the German economy. The AfD is itself split between an openly racist chairman and its 38 year old female “moderate leader” Alice Weidel, who lives in Switzerland.

Volkswagen AG made an additional $3bn provision for the diesel emissions scandal taking the total for the 2015 scandal to $30bn. The board cited the complexity and time consuming nature of fixing the installed software. Shares in Volkswagen and Porsche rebounded ahead of VW’s Q3 results in October.

Munich Re said it “might miss its profit guidance of €2-€2.4bn” for 2017 due to Hurricanes Harvey and Irma.

US President Donald Trump kept investors guessing about Janet Yellen’s position as Federal Reserve chair post February 2018, conducting interviews with credible potential candidates. The decision is likely soon and could backfire if an appointment is viewed as being of a political appointee as opposed to a person with central bank experience.

Weaker than forecast first weekend sales for iPhone8, (c.0.3% international iOS market share) v iPhone7 (1% market share) and iPhone6 (2%) has led to concerns that Apple revenues will be softer. However the board are pinning their hopes on iPhone X due in November. Apple shares dropped from $162 to lows of $151 before rebounding to $154.

The Financial Stability Oversight Council dropped the “SIFI” designation for US insurer AIG ending the threat of tighter capital requirements and increased regulatory oversight, leaving AIG open to acquisitions. The insurer was rescued by the United States from collapse in October 2008 via the injection of $182.3bn.