Themes from the Month 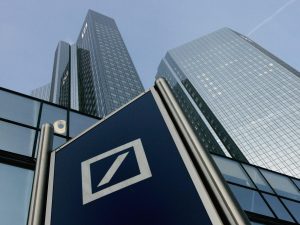 Deutsche Bank denied it requested the German government’s assistance after receiving a $14bn fine from the US Department of Justice. Investors are concerned its €5.4bn provision is insufficient for its US liabilities.

Commerzbank has suspended dividends and plans to cut 9,400 members of staff. The German bank is under pressure due to negative EU interest rates.

OPEC agreed to cut 700k bbls from production but it said the precise details of member quota cuts would be agreed at its November meeting.

UK Government appears to be facing a dilemma in whether to negotiate for a “hard” or “soft” Brexit.

Daily Mail & General Trust reported 4% revenue growth and lower net debt due to the US dollar.

Capita announced a profits warning due to a weak second half trading. It expects profit to decline £69m to £545m for 2016.

UK Mail has agreed a 440p per share cash offer from Deutsche Post. The Kane family and a number of institutional shareholders have pledged their support.

Sterling moved lower on expectations of a possible further Base Rate cut possibly before 2017. The pound has struggled to stay above $1.30.

SAB Miller voted in favour of the AB-Inbev buyout at £45 per share.

The “Brexit” debate is crystalizing into whether the UK government will position itself for a “hard” Brexit (an exit from the EU single market and full reliance on access via World Trade Organisation) or “soft” entailing continued access into EU markets, and agreement to adopt EU rules including freedom of movement in return for some sort of special relationship. It appears PM Theresa May is leaning towards taking full control of immigration as a priority hence a “hard Brexit”.

However the PM’s approach does not inspire confidence with overseas investors judging by the ongoing slump in sterling’s external value. Sterling has had a number of failed rallies since the Brexit vote, struggling to stay above US$1.30. Against the Euro, the pound looks like moving to parity or just above it.

Weaker activity in central London property is another symptom of investor unease with the UK’s new direction. “Brexit” is an idiosyncratic risk for central London, which is reliant on the foreign investor purchases. Brexit has so far cost London its “safe haven” status with prices now fragile.

There is concern over UK companies moving into lower cost jurisdictions to maintain full EU market access. Understandably companies do not want to have to rely on long winded UK/EU negotiations. EasyJet is rumoured to be considering moving domicile to Eire. Credit Suisse said it was “de-emphasising” the UK post the EU vote.

The steady Yuan and expectations of a “soft landing” have been positive for China. Expectations earlier in 2016 of crashing property prices and collapsing banks have yet to materialize.

The restoration of confidence is due to manageable capital outflows. This has helped confidence in the Yuan/ USD peg – Beijing maintains a stable band against the USD around a central rate of Y8.11/ USD. The People’s Bank of China ran down its foreign exchange reserves by $513bn in 2015 defending the peg from capital outflows.

The Chinese banking sector has also stabilized, Bank of Communications for example has added 10% since Q1.

The Capital Economics China Activity Proxy puts current GDP growth at 5% with activity currently picking up. This is below Beijing’s expectations of 6.5%-7% GDP growth but still impressive given the weaker conditions in China’s major trading partners in SE Asia, Europe/ Middle East and Japan. 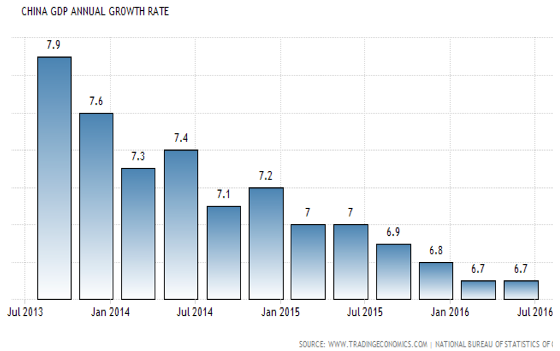 Deutsche Bank has stumbled with its valuation slumping to mid- 1980s levels. The trigger, a $14bn fine from the US Department of Justice (DoJ) was far above DB’s expected $2.5bn fine. Even if settled quickly for $4bn-$5bn, the cost could exceed current €5.4bn provisions and prompt another capital raise. The DB board responded by cutting extraneous assets (Abbey Life was sold realizing c.£1bn) but this strategy will take time to execute. Meanwhile CEO John Cryan’s assertions the bank will not need new equity lack credibility, hence the stock slump.

The CDS spread on Deutsche Bank at c.230 points, whilst elevated, are not implying a loss of market confidence. This is due to DB “too big to fail” perception, and its ability to issue equity. However the episode demonstrated DB’s reliance on its US operation (the former Bankers Trust) for profits and the problem of negative ECB interest rates, which undermine continental banks’ net interest margin. The role of the German government, which publicly distanced itself from a solution, is also being scrutinized. Leaked documents suggested that Berlin was prepared to take a 25% stake as a last resort.

DB is not short of liquidity access via the ECB though capital will need to be replenished.

US equities are unconcerned about the 8th November Presidential election following a very weak first debate by Donald Trump. His presidential campaign has swerved from the bizarre to the ridiculous to completely off the rails. His latest attacks on a former Miss Universe demonstrated a total lack of judgment typical of someone with zero experience of public office.

Could there be a “Clinton dividend” on November 9th? During Bill Clinton’s Presidency, US equities quintupled! The Clintons are a safe pair of hands one could argue this is a pre-requisite given the stretched valuations on Wall Street.
The US Federal Reserve has also come under fire from Trump for keeping interest rates too low and hence supporting the incumbent Democrats. The FOMC meeting suggested the December meeting will see a rate rise (it will be delayed for the election).

Meanwhile US petroleum stocks surged on news of a planned 700k cut in OPEC oil production. During September, Exxon Mobil sealed a $2.5bn deal to buy InterOil Corporation which moves shifts its exposure to LNG to c 10% of reserves.