Scottish “swing vote” will decide referendum, and that is the issue

Ahead of the September 18th referendum, recent polls have agreed that the vote will be close, maybe “too close to call” in American parlance.

Sinking into the Scottish consciousness last week was a chorus of blue chip companies, BP, Clydesdale Bk, RBS, Lloyds, Standard Life all basically saying the same thing about their intentions post a “yes” win. Even the Queen’s comments over the weekend aimed at urging caution. Photos of “Nessie” in Lake Windermere was an amusing poke demonstrating the notion that Scotland is risking its cultural icons to England if its votes to leave Great Britain.

If the Scottish referendum were a swing state in a US Presidential election (i.e. Pennsylvania) the polling companies would examine the 0.5m floating voter, who makes up his mind late, is susceptible to momentum and influenced by local issues. The swing vote is around 11.6% of the 4.3m eligible Scottish voters.

The swing voter is likely to be a young first time voter or a former Scottish Labour voter. Accompanying the Scottish youth are women and the 25- 30s age group – the so called fun loving, financially flexible “Millennials”. This population segment is more favourable to “Yes” partly due to generational issues and the dis-enfranchisement of the UK’s younger people since the late Nineties. This leaves the result unstable as the decision is with those with little to lose and possibly curious.

The “Scottish basket” of blue chips; Aberdeen Asset Mgmt (LSE:ADN), Babcock (LSE:BAB), BP (LSE:BP), Lloyds Banking (LSE:LLOY), RBS (LSE:RBS), SSE (LSE:SSE), Standard Life (LSE:SL) has exhibited more volatility than the UK 100 (UKX) trading in a wider band but still within a +2.2%/-5.5% range during the last week. Generally the basket has been trending lower within that range. 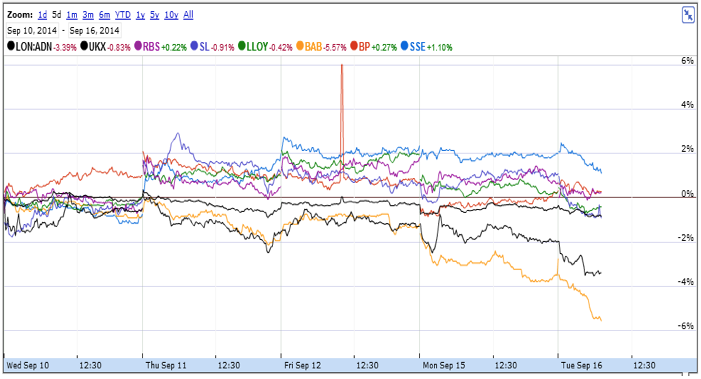 Taking a sample of the Scottish basket of shares above and monitoring daily range, and standard deviation (volatility) over 2 comparable periods 30 August 2013-13 Sept 2013 and 1 Sept 2014- 12 Sept 2014 show increased risk levels in the latter period.

The sample suggests investors have responded by adjusting risk levels accordingly in the referendum run- up period though risk levels have been affected by stock specific factors; BP- gross negligence finding and RBS plans to move domicile to the UK, in the event of Scottish “Yes” vote. This factor would have mitigated risk levels in RBS. Overall whilst volatility levels are higher and elevated they are not at excessively high levels as measured by standard deviation.

A further conclusion is companies have made contingency plans hence there may be limited longer term impact if there is a Yes vote even for companies very directly exposed.

UK 250 Most Impact from Scottish Referendum

With 2 days to go……the Scottish referendum looks very binary with a 45% risk of a Yes vote. By focusing on the higher multiple UK 250 Mid Cap, which is more UK exposed and lower yield its return should be higher as a SHORT than a similar UK 100 short.

2014 has seen intensification of geopolitical issues and talk of a new Cold War. In the last fortnight, UK/Scotland joined the list of unresolved geopolitical problems. This turn of events so far has been taken in its stride by US equities (the effective support for global equities) but this will change when the Federal Reserve starts to move the Fed funds rate. It could be an opportune time to have portfolio insurance in place, in any event i.e. a UK 100/UK 250 Short covering 25%-35% of net portfolio exposure.

The significance of the Scottish vote has not been overdramatized in my view. This is a major event with important implications for the UK and elsewhere in the EU. Fingers crossed the UK stays in one piece.