Russian issues come to the foreground

The MH17 disaster is quite clearly an event of significant geopolitical magnitude that resonates at many levels. It has forever changed the global perception of Putin.

To what extent does Putin’s vision of restoring Russia to its Soviet era status represent a major risk factor? What can realistically be done about Russian bullying and seizure of overseas territories? Whose lives will be endangered by this?

Vladimir Putin’s plans for a “Eurasian Union” laid out in 2011, when he announced a return to the presidency, is a trading block that would boost Russian influence on the global stage and bring Russia’s former Soviet neighbours back into the Russian hegemon. It would start as a customs union amongst the Baltic States and former “Stans” and expand from there. This was Putin’s second term blueprint.

When I visited Azerbaijan and Kyrgyzstan in 2004, both countries had been independent for just over a decade. Memories of the USSR were spoken of in terms of a nightmare experience. Kyrgyzstan was milked for its natural resources in return for basic roads, buildings and a currency union. Its experience was typical of the basic command economy structure of the Soviet Union that channelled the good bits back to Russia for as long as possible. The collapse of the USSR, referred to by President Putin “as the greatest geopolitical catastrophe of the 20th Century” was viewed as a salvation from the Kyrgyz viewpoint.

These days the world is organised into trading blocs. The EU had its origins in the 1948 Treaty of Rome – a free trade zone including France, Germany, Italy and the “Benelux”. The bloc has grown into the world’s largest single market. Whether the UK likes it or not, the EU concept has been globally imitated. The North American Free Trade Agreement, in force since 1994, created a trade bloc for the US, Canada and Mexico. The China- Japan-South Korea Free Trade Agreement is a proposed free trade zone that could cover a similar portion of global GDP to NAFTA. It is expected to be in operation by 2020.

Russia will always be outside its nearest trade bloc. Russia almost has a Turkish scenario, a periphery country that tries for years to get into someone else’s trading bloc, and fails. Putin realised Russia needed to invent its own bloc. But this takes years and is bilateral, it needs co-operation from large neighbouring countries. With the legacy Soviet experience, why would anyone sign up to a new Russian bloc? And what protections and incentives would the Russia provide?

When the Ukraine’s President Poroshenko signed a trade pact in Brussels on June 27th (reviving the EU deal rejected by President Yanukovych last November that triggered the Kiev riots), it brought the trade bloc issue into focus for Moscow. Russia encouraged separatist pro-Russian agitators in Crimea and in Eastern Ukraine. But Moscow’s plans for a trade union now appear in tatters, because other potential counterparties have witnessed the price Moscow levies for rejection.

It is worth recalling Russia’s Industrial Revolution. Russia and the United States industrialised during the 1880s- 1900s. Both had vast space to develop significant internal non export dependent markets. Russia did well in the early years because it concentrated on its own development and the shift from the agrarian economy. The same prescription is needed now. Putin’s vision misses the point. What Russia needs is internal reform and economic development. It does not need, and cannot afford superpower adventurism or controlling neighbours. It cannot be long before wheels start falling off.

Strain on the Russian economy?

The $2trn Russian economy is experiencing stress made worse by the accumulation of liabilities post Crimea. Investors have exited. GDP growth has slowed with current forecasts (IMF 0.2% GDP growth) pointing to near recessionary conditions:- 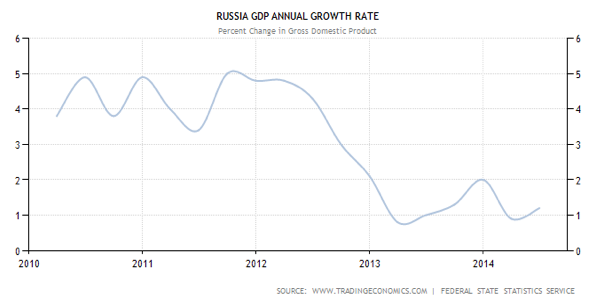 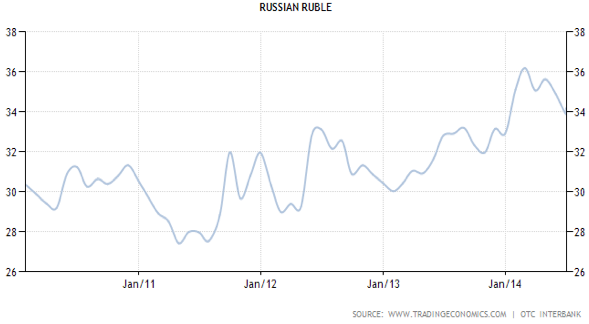 Previous Russian economic stress episodes tend to be short lived and end in a big bang:-

a) In 1985 the Soviet Union started borrowing on international markets from a cash neutral position at LIBOR+0.25%. By 1990 $55bn of external debt had accumulated and bond market access had ended. In 5 years Moscow’s debt limit had been reached/ credit rating destroyed / superpower status ended.
b) The Asian Crisis in 1997 led to a run down in Russian foreign exchange reserves. A $22.6bn IMF rescue package arranged in July 1998 was spent on a disastrous plan to defend the rouble within a band of RUB5.3-RUB7.1 leading to Russian devaluation and bond default in August 1998. MICEX equity valuations fell by 65% and bond yields rose to 200%. On this occasion an external problem germinated to major Russian crisis in c.18 months.

In both cases weak commodity prices inflicted severe hardship on Russia. Putin’s government is aware of Russia’s fragile economy and its reliance on energy/ oil prices/ gas sales to EU. Moscow started the clock ticking with the Crimea grab. This time round Russia is starting from a low debt/ GDP rate (as in 1985) and the Kremlin thinking appears to be to turn China into an easy creditor. It may be that there is little linkage between Russia Eastern Ukraine ambitions (a first order effect) and the short term economic impact (a second order effect). The Moscow gamble is the EU will be unwilling to move in the direction of more punitive sanctions due to its reliance on Russian energy. This was a fair bet pre MH17 however now looks misplaced. How Putin reacts to more punitive sanctions is a “known unknown” – it could be the Kremlin starts to target EU corporates by confiscating their Russian assets – a “Yukos” style asset grab.

*President Putin, like previous Russian leaders are loath to back down from any military confrontation. That was the lesson of Nikita Khrushchev. At the same time the appetite in the West to design a face saving formula for Putin looks a lost cause. There has been a total reappraisal of Russia’a objectives and a total loss of trust.

*The East Ukraine conflict depends on the stalemate between the separatists and Ukrainian army continuing. A quick victory over the separatists might be a way out for everyone.

*This is a systemic risk event(s) whose longer term implications are unclear. Russia/ Ukraine, Iraq, Israel/ Palestine adds up to elevated geopolitical tension/ economic uncertainty. It is in our view similar to the North African “Arab Spring” in 2011 – a prolonged period of elevated uncertainty. The difference this time is elevated equity valuations particularly in US equities and an overdue period for at least a 10% correction. This is a perfect time for a hedge/ portfolio insurance of equity exposure- investors should seek to hedge US equity exposure – for short-term investors we would suggest a hedge of 50% of equity exposure.