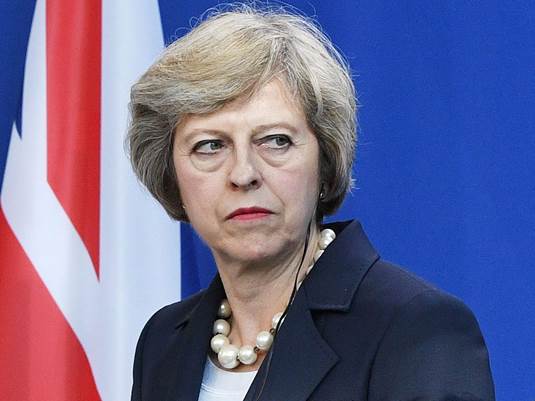 Barely days in office, the PM stated in Parliament that she would not provide a “running commentary” on the “Brexit” process, because it might prejudice the negotiations (that have not started yet). The May government then lost a High Court case (3rd November 2016) where judges ruled it could not trigger Article 50 of the Lisbon Treaty on its own. That case is on appeal with a ruling from the Supreme Court expected in February. The court ruling, as it stands means, an Act of Parliament is required (hence a vote) to trigger Article 50 and likely introduce the repeal of the EU enabling legislation, the 1972 European Communities Act.

Under pressure from the EU Council for a timetable, the UK agreed to trigger Article 50 by 31st March 2017. The EU has rightly refused to begin negotiations ahead of the Article 50 trigger. This was contrary to UK efforts to “sound out” individual countries positions on “Brexit” in advance.

Since the “Brexit” result, debate has raged on its precise form, “hard” or “soft”. A “hard” Brexit would entail control over the UK borders and immigration and a loss of access to the EU single market. UK passport holders are likely to lose the right to live and work in the EU. A “soft” “Brexit” would introduce restrictions on EU immigrants but retain access to the EU single market based on a Norwegian or Swiss type system. A “clean” “Brexit” apparently devised by Boris Johnson implies leaving the customs union. The PM has repeatedly said she does not recognize these labels, “Brexit means Brexit”.

However the UK government has given precise assurances to Japanese investors, specifically Nissan, that UK manufactured cars would retain EU single market access. Other areas contain contradictions, the government keeps the pressure on NHS GPs and junior doctors insisting they work longer hours for lower pay, yet wants a “Britain that works for everybody”. The May government has refused to accept informed opinion on worsening NHS problems.

The PM prepared the ground ahead of this speech. The UK could not expect to keep “bits of the EU.” Following an immediate slump in sterling, the PM retracted the comment saying she wanted the UK to “operate within” the single market as part of a new relationship. Following a very negative front cover assessment by the Economist “Theresa Maybe” the PM has today, come forward with clarity.

The PM’s plan; it was a good speech with clarity

“We are leaving the EU but not leaving Europe” this was a substantial discourse that set out with some clarity the approach the UK government wants to take. The UK wants its own deal with the EU on its own terms not anything resembling a Norwegian or Swiss approach.

“Not partial membership or anything that leaves us half in or half out, we are not holding on to bits of the EU.”

Certainty & Clarity :- as described above
Stronger:- A unified approach that takes onboard the views of Northern Ireland Scotland and Wales.
Fairer:- A fairer Britain will control immigration from EU, but remain open to international talent via a properly managed process. The record levels of net migration stretched infrastructure and put downward pressure on wages.
Global:- The PM wants to reach out and have the UK become a free trade actor globally. This starts with a bold and ambitious EU free trade agreement, allowing for max freedom to operate in EU; not membership of EU single market (which would mean complying with EU regulations). This free trade deal would take similar form in some areas (cars, finance) to existing arrangements. But once outside of the single market and customs union, the UK will not be required to contribute to the EU budget.

The UK needs to increase trade which as a ratio of GDP has broadly stagnated; the UK needs to “get out in the world” to China, India and the Gulf States

The PM made clear that the EU needs the UK due to its commitment to Europe’s security, she made the point only Britain and France are permanent members of the UN Security Council and the only nuclear armed powers. Repeatedly she offered reassurance on the benefits of UK intelligence sharing on areas of terrorism, cross border crime and hostile states. She intimated that this could be in jeopardy if the UK did not get what it wants i.e. a free trade deal.

The UK will no longer make payments to the EU on an annual basis. It will consider contributing in some areas on their individual merits. The withdrawal of UK payments will increase the costs of the EU for Germany and France.

The PM made clear that EU leaders who wanted a punitive deal would potentially result in no free trade deal that would endanger £290bn of EU exports to the UK, create new barriers to trade and potentially result in corporate taxes in the UK coming down creating a new problem for the EU. It was implied that the UK might abandon its commitment to EU defence/ security if the EU employed this approach.

The problem with this threat is the EU is unlikely to agree a free trade deal with the UK that is on better terms than EU member states enjoy.

Ahead of the PM’s statement, GBP was up after inflation data showed a spike in November to 1.6% (+0.4%) hence the weak currency is creating inflationary pressures (necessitating higher Base Rate in due course?)

Post the PM’s statement at 11:45am GBP moved very sharply higher, presumably on the thinking that the EU was more likely to agree a deal with the UK now the formal objectives have been forthcoming. 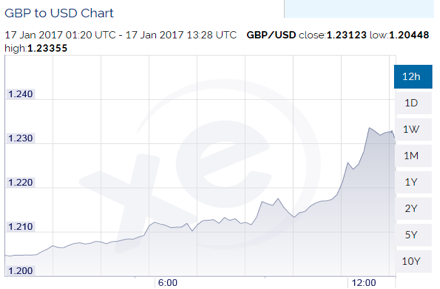 Both Easyjet and Wizz Air are higher benefiting from the UK positive approach to transitional/ phased arrangements as relevant to the EU “Open Skies” policy that benefits UK budget airlines. Investors have marked up Easyjet (+37p) and Wizz (+49p) in response. Sterling’s moved up 1.7 cents to €1.1540 a benefit for companies with Euro expenses.

Standard Chartered is up sharply after its corporate broker, Merrill Lynch raised the stock to “buy” from “neutral” with a 900p price target, the implication being Merrill was being guided to expect a better outcome after new guidance from Standard Chartered.

The President-elect appears very keen on a strong US-UK relationship partly due to his Mum’s apparent affinity for the Queen, his heritage, investments in Scotland and so forth. There has yet to be however meetings between heads of state.

Other countries have been pro-active in voicing support for specific tailored free trade deals, though obviously on their terms. An Australian initiative was forthcoming but based on improved working access / immigration access for Australians. This sounds like replacing EU immigration with Australian immigration!

For almost seven months we have been in the dark. The PM’s speech does move things forward in key areas.