Conservative MPs narrowed the choice of the next PM to either Boris Johnson or Jeremy Hunt – the final choice will be made by Conservative party members ending on 24th July 2019.

G20 summit, both US and China agreed to restart talks aimed at unblocking the stalemate, however President Trump signalled he was in no hurry to conclude talks.

US Federal Reserve softened its language at its recent meeting, noting trade frictions and moderating global growth stating “we will act as appropriate to sustain the expansion”.

Companies in which Woodford funds have significant stakes have dropped sharply on the expectation of stake sales.

Millennium & Copthorne Hotels board agreed an offer from parent company City Developments worth 685p per share – so far US holders have not objected.

Over June major deals started in the midcaps, both Millennium & Copthorne and Merlin had been mooted as minority buyouts for years. We expect both to complete without further complications.

Investors voted goodbye to Lonmin and RPC Group but enthusiastically greeted an IPO for Trainline, the rail booking app. Trainline had priced at 350p per share, the top of its range but nevertheless closed at 413p at a valuation significantly above its bus and railway peer group.

The main talking point, the suspension of cash withdrawals at Woodford Equity Income, is likely to result in more oversight of fund platforms and managers. The issue exposed the problem of low liquidity at UK investment funds and conflicts of interest in the promotion of these funds on fund supermarket platforms.

China’s approach to the trade talks has been deliberately careful. During June, its leadership issued a travel warning for the US warning of the risk of mass shootings, a very specific US problem, and threatened to restrict the export of rare earths. This was seen as a response to America’s efforts in Europe to convince allies to restrict the adoption of Huawei technology.

Beijing opted for crisis management in withdrawing the extradition bill reducing the scope for mass protests which were clearly disrupting the short term agenda and putting pressure on the HK dollar peg. As Hong Kong assets rallied after the move, many investors were wondering when precisely Beijing would return with the same proposals.

The deterioration in Japan’s trade balance, June data showed a May deficit of Y967bn suggests a weakening demand for Japanese exports. So far Japan has not been touched by US trade war threats, an issue that could resurface anytime.

EU restructurings are underway. BASF has decided to cut 6,000 jobs whilst Deutsche Bank is reportedly considering headcount reductions of 15,000-20,000 (c.20% of staff). Deutsche is also considering a “bad bank” for warehousing c. €50bn of risky assets. The move comes after Deutsche Bank failed to pull off a merger with Commerzbank.

ECB chief Mario Draghi suggested “additional stimulus will be required” at the annual meeting in Sintra, Portugal sending the Euro lower against major currencies. The issue is more how such stimulus will be delivered either via lowering the ECB bank deposit rate (from -0.4%) or buying additional government bonds. The statement was enough to draw an angry tweet from Donald Trump who claimed the ECB was attempting to manipulate the Euro. But the Euro rose against the USD over June.

US equities’ June gains were attributable to the US Federal Reserve’s softening stance.

US 10 year yields continued to decline, the yield to maturity reaching 2.03%. The yield curve continued to shallow out reducing spreads, a factor that is impacting financial stocks. 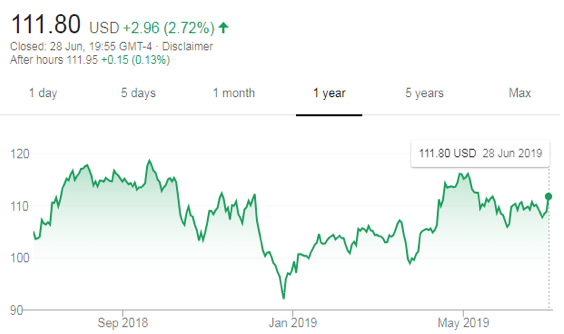