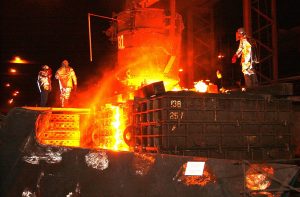 President Donald Trump has unilaterally started a trade war imposing tariffs on imports of EU, Canadian and Chinese steel and aluminium. Trump has threatened to impose tariffs on EU autos and auto parts pending a review as to the “national interest”.

John Lewis Partnership owner of Waitrose said it is closing 5 shops after “close to zero” interim profits. The retailer said the sector is going through a period of “generational change”.

Gold dropped to $1260 per ounce, dropping almost $40 over June. Investors have been weary of gold due to rising US interest rates.

Unilever said it is likely to lose its position in the UK100 blue chip index after lengthy discussions with FTSE Russell.

Inmarsat revealed that EchoStar Corporation had expressed interest in a possible takeover though its interest was “highly preliminary and non-binding”.

House of Fraser obtained backing from its creditors for a plan that will close 31 of its 59 shops. Around 6,000 staff will lose their jobs.

UK equities are dirt cheap according to Standard Life Aberdeen urging holders to “park the pessimism” ahead of the exit of the UK from the EU on the 29th March 2019. The fund manager claims international investors are underweight the UK despite increased M&A activity, a higher yield (3.7% v 2.7% for global equities) and attractive valuation.

Sterling returned to near post Brexit lows v both the Euro and US dollar. This reflects political wrangling at Cabinet level between the pro-Brexit lobby and those seeking a closer relationship with minimum disruption with the EU. Regardless of the UK wish list, the EU seems less willing to give in to UK demands on a range of issues.

The People’s Bank of China guided the renminbi lower vs US dollar – a move designed to build buffers against a protracted trade war with the United States. In addition the central bank cut the reserve ratio by 50 basis points releasing c. $108bn in liquidity, a move that would stimulate lending. 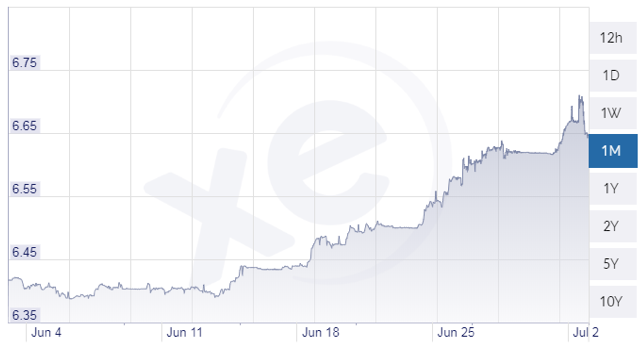 China has placed restrictions on US soybeans and a 179% tariff on US sorghum imports, both items from the Midwest and South – both regions voted for Donald Trump in 2016. The Chinese leadership does not want a trade war and has made it clear many times that it is responding to aggressive moves, not initiating them.

The Italian government calmed nerves in June. The Interior Minister Matteo Salvini has promised action to cut migrant arrivals (600k have arrived since 2014) whilst PM Guiseppe Conte had a successful European Council meeting.

Italian government 5 year credit default swaps (CDS) that offer protection against default declined to 215 basis points indicating a lower cost and hence lower risk. This is an important barometer for the intensity of the Italian problem. The new government has not made further statements about EU withdrawal.

US President Donald Trump has ordered a Commerce Department investigation to determine whether EU car imports are against the US “national interest” with a conclusion expected in late July. He has threatened to impose 20% tariffs on auto and autoparts imports.

President Trump arrived late for the G7 meeting, left early and tore up the agreed script once in the air, en route to Singapore for the North Korean summit. This is unprecedented behavior. The G7 is struggling to address how to handle a US president that has gone from being unpredictable and whimsical (which is just manageable) to one being deliberately provocative and disruptive. The US is insisting on taking unilateral action on tariffs in breach of the World Trade Organisation (WTO) rules. The rumour is the US is considering contingency plans to leave the WTO.

Mexico, Canada, China and the EU have responded in kind with tariffs on US imports. A game of brinkmanship is underway, at the cost of consumers. Ahead of the NATO meeting in Brussels on the 11th -12th July there is nervousness over whether Donald Trump will reiterate recent demands that NATO members increase their defence budgets. This will again put other governments on the spot to deliver a Trump agenda or risk the consequences.

US equities reported strong EPS growth in the first half of 2018. But that was the result of a global free trade system that is imperiled. US investors have assumed a “fortress America” mentality, but this is a big assumption.