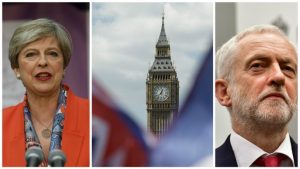 UK General Election resulted in a hung parliament with the Conservative party now reliant on DUP support for a 13 seat working majority.

US President Donald Trump hit back at comments from Republican senators who claimed he had limited grasp of the complexity of US healthcare reform.

Governor Mark Carney hinted the Bank of England could withdraw monetary stimulus if UK wages pick up. A quarter point rise in UK base rates to 0.5% could occur in 2017.

Karen Bradley, Culture Secretary is “minded to” refer the Sky/ Fox takeover to the Competition & Markets Authority for an in depth review. A referral could take 24 weeks hence a completion in 2018.

Tesla announced it will start delivering its Model 3 electric powered saloon cars in July with production increasing to 20k per month by end 2017.

June 2017 saw the travesty of the 2017 election quickly followed by the tragedy of the Grenfell Tower inferno. It is said that all political careers end in failure but few people expected the UK election result, not least the PM.

It was yet another needless political risk that badly backfired. The political mess has resulted in a calmer consumer post-election as attested by DFS Furniture and JD Sports. The remainder of 2017 could see a tangible GDP deceleration.

Vince Cable MP opined that “the UK economy’s reliance on consumer spending propped up by debt is not sustainable”. Quite so.

The FTSE 100 has been helped by a surge in HSBC to 52 week highs following a report from Morgan Stanley claiming HSBC would generate around $45bn of surplus cash by 2019. In the latest Federal Reserve round of stress tests, HSBC’s North American business was overcapitalized. This supports Morgan Stanley’s view that HSBC could buyback $2.5bn of its shares.

Hong Kong returned to China on 1st July 1997 on expiry of the UK’s 99 year lease. Many have since questioned China’s actual adherence to the recognizing democratic principles of “one country, two systems” agreed in 1984. On the last day of UK rule of the former colony, the Hang Seng Index stood at 15,196.79. China Construction Bank expects the Hang Seng Index to hit 29,000 in Q4 2017 an 11% gain on current levels.

June 2017 saw another important milestone, for the first time 222 of China’s “A” shares listed in Shanghai and Shenzhen will be included in MSCI’s Emerging Market Index. It is quite possible that Chinese stocks will comprise around 40% of the index assuming further Chinese economic liberalization including freeing up exchange controls.

The death of former German Chancellor Helmut Kohl on June 16th (barely reported in the UK) gave pause for thought for the legacy of the man called “the Father of Europe”. The fall of the Berlin Wall, German reunification, the Maastrict treaty, EU single market took place under Kohl’s watch. He persuaded the Germans to swap their Deutsche Mark for the Euro. For many of the EU’s political class, Kohl represented what could be achieved by visionary political leadership.

Eurozone inflation of 1.3% over June declined 0.1%. This is under the 2% target which was briefly hit in February. This came as ECB Governor Mario Draghi spoke of a “firming and broadening” Eurozone recovery at the ECB’s Economic Forum in Sintra, Portugal. Speculation grew that the ECB is preparing the ground for withdrawal of its €60bn monthly bond purchase order.

Greece is likely to receive an aid disbursement of €8.5bn in July after the Greek Supreme Court dropped its case against three officials who had overseen the sale and leaseback of 28 state owned buildings in 2015.

The Federal Reserve plan to trim its balance sheet by c. $10bn per month is a step in the right direction. It is a tentative first step that will allow a run down over the next 25 odd years, assuming bond redemption proceeds are not reinvested. The move was seen as typical of the tip toe approach used by Janet Yellen.

The sell-off in Nasdaq shares was the major theme for June and this is noticeable in the biggest techs.