Conservative party members voted to appoint Boris Johnson MP as leader by a majority of almost 2:1. The new PM stated the Withdrawal Agreement was dead and the backstop provisions must be removed.

EU leaders have stated they will not re-open or renegotiate the Withdrawal Agreement and the Northern Ireland backstop provisions must remain. 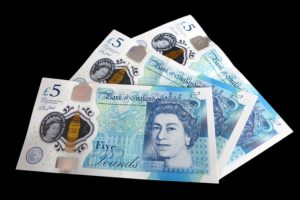 US Federal Reserve lowered its key Federal Funds lending rate by 0.25% as widely expected. The board had been under pressure from President Trump to cut by 0.5%.

BP reported interim profit of $4.75bn but the board left the quarterly dividend unchanged at 10.25 cents.

The appointment of PM Boris Johnson alongside a new cabinet of his “Brexit” buddies cemented the view the UK will leave the EU on the 31st October regardless. As any new EU deal must include shelving the Irish backstop, there is significant brinkmanship in this approach. Many UK businesses are unprepared for a “hard Brexit”.

Whilst it is highly likely a UK/EU deal will be concluded at some point, securing a UK/ US trade deal as the new PM has signaled will be a tough negotiation involving Congressional approval.

Whitbread’s purchase of 21% of its share capital at 4972p caused the shares to be marked down over 500p at their worst point as short sellers emerged. Some concern has been raised about increasing competition facing Premier Inns.

China has imposed a ban on Chinese nationals travelling to Taiwan as individuals effective from August 1st in a move designed to influence Taiwanese elections in January. In the context of China’s clampdown on protests in Hong Kong, the Beijing government appears to be taking a more muscular approach to issues closer to home. 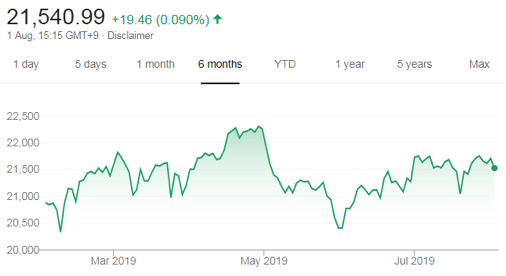 Takeda Pharmaceuticals jumped 7.4% to ¥3,904 after forecasting a drop in net losses for the 2020 (end March) financial year due to the growth of its blood cancer treatment.

Nomura Holdings rose 9% to ¥375 after benefiting from strong trading conditions over Q2 particularly in the US. The board is cutting $1bn from costs with most of the savings from UK/EU operations.

ECB chief Mario Draghi ends his eight year term on the 31 October 2019 but investors are focusing on possible measures in his last months. The central bank kept reserve interest rates at -0.4% on 25th July but expects rates at “current or lower levels until mid-2020”. This raised expectations of an ECB rate cut to -0.5%. Incoming ECB chief Christine Lagarde, current IMF chief, until 12th September, is a safe pair of hands, likely to continue Draghi’s approach in the short term.

Widespread sackings at Deutsche Bank alongside a Q2 loss of €2.8bn, has led to speculation over a Deutsche requiring further capital and another rights issue. CEO Christian Sewing is targeting a staff of 72,000 by 2022 as part of a restructuring to focus the business on its German and New York operations. However the restructuring costs at €7.4bn cannot be met from internally generated funds. 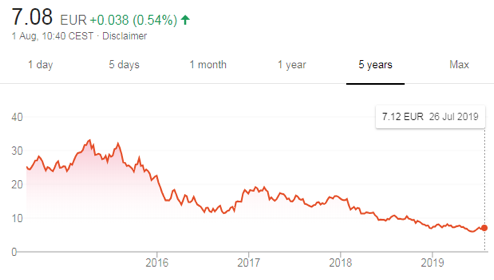 As expected the US Federal Reserve cut Federal Funds by 0.25% to 2%-2.25% however the accompanying language made clear the board saw the cut as a one off and not the first of a series, given the strength of the US economy. The grounds for the cut, a slower world economy, and trade tensions are not normally grounds for US monetary easing.

US President Trump displeased by the Fed’s caution on rates, was further upset by the 0.25% cut. There has been commentary that he is looking to end Federal Reserve chair Jay Powell’s term quickly notwithstanding the repercussions. 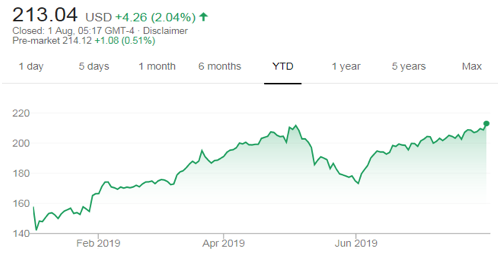