CFDs are complex instruments and come with a high risk of losing money rapidly due to leverage. 66% of retail investor accounts lose money when trading CFDs with this provider (Saxo Bank). You should consider whether you understand how CFDs, FX or any of our other products work and whether you can afford to take the high risk of losing your money.

World markets slumped after a contagious and deadly viral strain known as the Wuhan Coronavirus caused the shutdown of Wuhan and the cancellation of flights by major international carriers into China. Monetary Policy Committee left Base rates at 0.75% citing an improving UK economy, decline in Brexit uncertainties and the governments’ plan to boost spending.

Fevertree reported a 1% decline in UK revenues and flagged an expected 5% drop in 2019 earnings due to lower margins.

Aston Martin is to raise £500m via a rights issue for £318m and a £182m strategic investor consortium led by Lawrence Stroll.

Black Rock Chairman Larry Fink, the world’s largest asset manager has said climate change will cause a significant reallocation of capital and will reshape the world’s financial system.

Now the hard bargaining begins as the UK targets an end 2020 timeframe for a UK/EU trade deal. London wants single market access, without paying for it and with freedom on regulatory alignment and diversion from other rules. The EU wants to maintain the UK’s custom without creating a new competitor on its doorstep, willing to undercut the EU on taxation, standards etc. The main victim is likely to be London’s financial sector with the UK government open to a deal that leaves out the City of London.

UK capital markets were hopeful of a Base Rate cut given the slowing global economy and weak UK data going into 2020. The MPC thought otherwise and hinted at recent UK acceleration. Both sides in the MPC appear to be in entrenched positions with the 2 strong dovish minority not succeeding in persuading any of the 5 hawks.

UK blue chips have reversed the pre-election and election result gains (c.350 points) and are back at mid-November levels. It is said politics only momentarily influences markets, and so it proved again.

Hong Kong bore the brunt of the Wuhan corona-virus sell off declining 6.37%. The Hang Seng has been in the firing line for over 6 months with the social and political unrest and standoff with Beijing intensifying.

Wuhan is c. 1000 km from Beijing, Shanghai and Hong Kong but the virus’ rapid transmission has resulted in the near closure of China’s airspace to international flights. When coupled with vast number of the workforce staying at home, this can only be detrimental to China’s GDP growth. We estimate a 2% drag on China’s GDP assuming the virus lasts 3 months.

Tokyo’s Nikkei maintained its reputation as a good diversification asset, outperforming with a decline of 2% over January. The Yen rose initially on the China crisis before ending January flat.

The European Commission reported that 2019 GDP growth in the Eurozone was 1.2%, but Q4 GDP growth at just 0.1% from 0.3% in Q3 was showing a rapidly weakening trend.

Over Q4 2019 Italian GDP shrank by 0.3%, its worst performance since 2013. French GDP declined by 0.1% due to strike disruption resulting from reforms to retirement benefit schemes. However Spain continued to grow, rising an impressive 0.5% due to export performance and improving LatAm trade.

Whilst not a factor in 2020, Brexit could damage EU GDP growth over 2021 if the transition period fails to result in a UK/EU free trade deal.

The issues facing China have hurt EU luxury retailers including LVMH (-10%) & Hermes (-6%). LVMH has also been impacted by concerns it has overpaid for Tiffany (acquired for US$16bn). 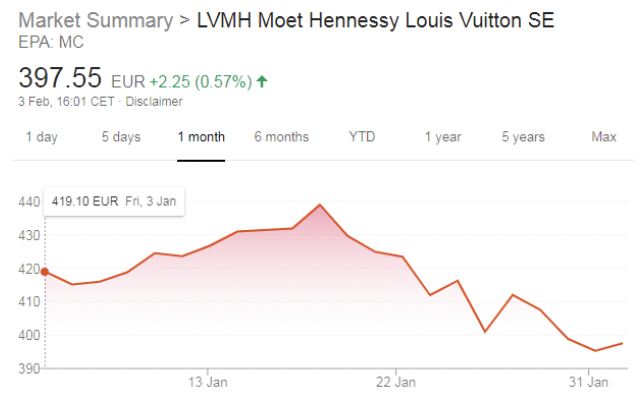 US techs continued to climb with Amazon and Alphabet reaching the US$1trn market cap club. The record valuation of Apple at $1.4trn substantially exceeds the US energy sector (c. $1trn). This theme played out over January with sector leader, Exxon Mobil declining to 5 year lows. This reflects not just a sector rotation but underwhelming Q4 results. 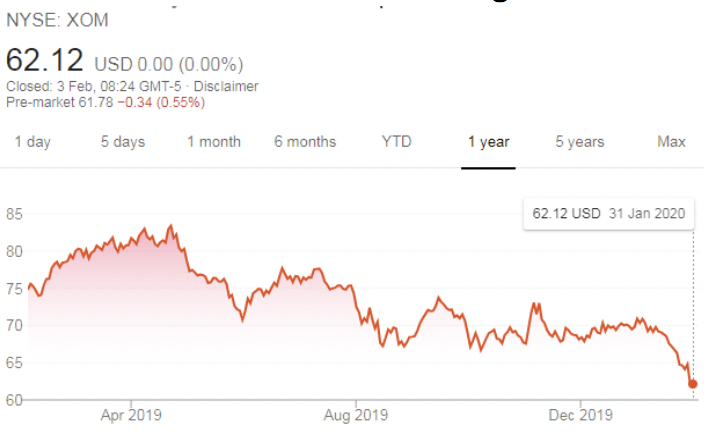 According to a recent Goldman Sachs report, US investors are turning against high debt, climate unfriendly fossil fuels/ environmentally damaging commodity related companies. In a nutshell this means a sell-off in oil majors and miners.

US equities succumbed to the virus related global sell off on the last trading day, with the Dow declining 603.4 points (-2.09%). The move came after a strong run up to over 29,000. Normally US investors show limited responsiveness to non-US problems. Nevertheless we expect the US market to continue to show some caution.

Please be aware that the following disclosures of Material Interests are relevant to this research note:

The report’s author certifies that this research report accurately states his personal views about the subject securities, which is reflected in the ratings as well as the substance of the reports.

Collins Sarri Statham Investments Ltd (CSS) does not in any of its publications take into account any particular recipient's investment objectives, financial situation, and specific needs and demands. Therefore, all CSS publications are, unless otherwise specifically stated, intended for informational and/or marketing purposes only.CSS shall not be responsible for any loss arising from any investment based on a perceived recommendation.

No publication (including recommendations) shall be construed as a representation or warranty that the recipient will profit, nor avoid sustaining losses, from trading in accordance with a trading strategy set forth in a publication.

This research is non-independent and is classified as a Marketing Communication under FCA rules detailed in their Conduct of Business Rulebook (COBS). As such it has not been prepared in accordance with legal requirements designed to promote independence of investment research and it is not subject to the prohibition of dealing ahead of the dissemination of investment research outlined in COBS 12.2.18.

Trading in the products and services offered by Collins Sarri Statham Investments Ltd (CSS) may, result in losses as well as profits as the value of investments may go down as well as up. You may not get back the full amount you have invested. Any reference to past performance should not be viewed as an indication of any future performance. Investments held in overseas markets are subject to the effects of changes in exchange rates which will impact on the value of the underlying investment. Investments made in AIM and penny shares carry an increased risk due to the difficulty in creating a market in these shares. There may be a substantial difference in the buy and sell price. Leveraged products such as Contracts for Difference (CFDs), derivatives, commodities & Foreign Exchange (FX), carry a higher risk to your capital and they can lose their value rapidly.

Speculative Trading is not Suitable for all Investors