This was an Inauguration speech unlike any other, inflammatory, full of misrepresentations and accusations. It blamed the Washington political establishment which “protected itself but not the citizens of our country”. The speech took direct aim at former administrations for “defending other nations’ borders while refusing to defend our own”, “spending trillions of dollars overseas while America’s infrastructure has fallen into disrepair”.

“Every decision on trade, on taxes, on immigration, on foreign affairs will be made to benefit American workers and families. Protection will lead to great prosperity and strength, we will follow two simple rules, buy American and hire American” said President Trump.

“We assembled here today are issuing a new decree to be heard in every city, in every foreign capital, from this day onwards it is only going to be America First- America first!” said President Trump.

Quite apart of mischaracterizing America as being in a state of “carnage” the speech addressed only the Trump faction assembled. It said nothing to the rest of America that did not support Donald Trump, it did nothing to allay the very real concerns abroad, it sought to blame but not provide solutions.

New Presidents usually enjoy a “honeymoon” period where they enjoy the goodwill of the US Congress and public. This is said to cover the first 100 days in office when the Administration is busy making its priority changes. However the Trump Administration has already squandered its honeymoon, lashing out at anyone suggesting the Trump Inauguration day was poorly attended. The new White House press spokesman Sean Spicer claimed the photographic evidence supporting weak attendance was a misrepresentation. He warned “we are going to hold the press accountable” suggesting legal suits and limitations on press freedoms. Spicer did not allow the press any questions, an unprecedented step for the first day in office.

These first days in office have set the tone for not just a government/ media war, but a deliberate attempt to subvert freedoms of the press and other constitutional freedoms that would be characteristic of Zimbabwe.

Denying access to the press room would make the job of the US print media harder, limiting access to the Administration but more importantly, release the President and his team from the obligation to answer probing and hostile press corp questions. It would benefit online and other digital media which are more prone to manipulation.

The Trump’s Administration’s far right approach is going to run into significant problems in the United States, which has only experienced such dogmatic, dictatorial government styles during world wars and the civil war.

The Donald’s “known unknowns” (as the other Donald would say!)

Former US Defense Secretary, Donald Rumsfeld was fond of categorizing “known unknowns” the items where we know that we don’t know. This seems apt in respect of Donald Trump.

a) “Protectionism”? A move to protect US industry, putting the USA first is likely to have a number of effects. The primary first order effect would be to deter new foreign investment in the United States as investors would perceive a hostile environment where the investor would not be able to sell/ exit without having to pay punitive taxes. But how would this work in reality given NAFTA’s commitment to open markets within North America? There are significant unknowns relating to foreign company access to US markets.

b) How will Donald Trump go about restoring prosperity to the US mid-west, the “rust belt”? There is no plan for this. He complains about derelict factories. Back in the 1970s US factories were large employers, but modern factories these days are automated. Modern factory processes these days are not designed to require significant workforces. Simply re-opening Detroit car factories will not result in significant job gains. The same is true in the garment, apparel, footwear and textile industries.

Donald Trump needs to embrace “green” technologies, solar, wind, wave, fuel cells, areas where opportunities for capital investment are abundant. But such a move would run counter to his assertions on climate change and the need for coal investment. Green tech poses a problem for him because it necessitates diversification away from fossil fuels, and supports the climate change ethos. The world is moving from fossil fuel reliance to green but by removing all White House website references to climate change the US Administration appears hostile to the ambitions of green alternative power.

c) Donald Trump’s attitude to NATO and commitment to its periphery, countries like the Baltic States. Would Trump have any interest in America paying for the defense of NATO countries that are unable to pay the meet a 2% defense / GDP spend that he demands? Nobody knows the answer to this. Nor by extension the Trump response to other “hot spot” areas of the world. a) A new US/ EU relationship looks on the cards – the EU must craft an effective response to Donald Trump in a manner that maintains a visible US commitment to the relationship. What would this relationship be based on?

b) Relationship with the US media and other global critics – as discussed above, and during the campaign the Trump team has never adequately answered the questions and issues put to it. It appears to be setting up structures to prevent it having to answer such issues.

c) Will Trump be restrained by US constitutions checks and balances? In one significant area, this has already failed. The Office of Government Ethics publicly denounced President Trump’s plan to turn control of his business over to his sons as “meaningless” as a means of preventing conflicts of interest. Trump has ignored calls to improve his plan to separate his businesses from the Presidency.

Donald Trump has arrived in the Oval Office, but there is no arms’ length arrangement in place whatsoever, no blind trust and no effective block between Trump’s business interests and the Presidency. This was a key objective of the transition period and it has been ducked. It is all eerily similar to his refusal to disclose his tax statements.

Investors are fickle and short-term. In 2016 they reasoned that Trump plus a Republican Congress would cut US corporation tax from 35% to 15% over 2017. As a result US equities moved to price in a near 20% jump in 2017 EPS for S&P 500 constituents. This is forward looking and presumptive as many US companies were not paying an effective 35% rate anyway.

Another bone thrown to investors was a tax cut on cash held overseas. The offshore cash repatriation plan would cut to 10% from 35% the tax on offshore earnings that returned to America. This capital is likely to be deployed on share buybacks, special dividends, executive pay or possibly M&A (on the evidence of the 2004 tax holiday). The Trump offshore plan appears badly thought through. It does not require companies to spend repatriated cash on new staff or R&D or new plant and equipment.

Putting aside the obvious, that so far investors have treated these “promises” as cash equivalent despite the absence of any detail or timeline, here is the problem. These promises are only credible insofar as Trump’s plans are credible.

Donald Trump’s promised spending spree is taking place within the context of a US debt to GDP ratio already at near record levels for modern times. 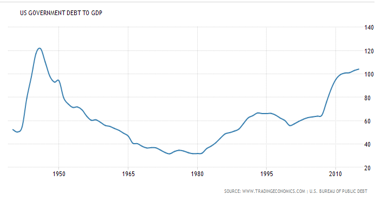 The US no longer has the financial flexibility it had a decade ago, pre-crisis. Increasing US debt would mean sharply higher bond yields and market interest rates. It is likely to lead to US Debt / GDP>130% above levels in WW2.

Will the US Congress allows the Trump Administration to ramp up deficit spending? Another known unknown. Unfortunately for Donald Trump, the USA needs the goodwill of foreigners, not just to fund its current account deficit but to buy its products. He has embarked on a course of alienating foreign interests which can only end badly for him and for the USA.

Since the campaign entered its final stages, one question many in the world have asked is how far can Donald Trump be taken seriously? How constrained will he be once in office? Will he be forced to “pivot back” to normality? Will he tone it down? Or other configurations of essentially the same point. I am compelled to conclude post Inauguration, that going forward we have to take Donald Trump at face value. It is not safe to assume he will calm down. That is certainly not priced in to US equities.