Royal Bank of Scotland signalled a return to financial health it will pay a 7.5p special dividend alongside a final dividend of 3.5p. The bank reported a 2018 attributable profit of £1.62bn beating consensus forecasts of £1.42bn. Marchks & Spencer is to raise up to £600m via a rights issue to fund its joint venture with Ocado. The board announced they will reduce the 2019 dividend by 40%.

Ocado will receive up to £750m from Marks & Spencer for the creation of a 50/50 joint venture that will transform Marks’ delivery capabilities.

Hammerson intends £1bn of asset sales and is currently in talks over £900m of its portfolio. The board reported its gearing rose to 63% from 58% after reporting a 5.9% drop in its portfolio value to £9.94bn.

CMC Markets reported revenues fell were likely to fall up to 35% due to weaker retail client activity post the adoption of ESMA rules on 1st August 2018.

UK capital markets ended February with investors confident of a soft Brexit outcome. This was apparent from a stronger sterling that held its gains and falling gilt yields. Blue chips were up despite sterling. Mid-caps were very strong.

Despite the proximity to the assumed Brexit on 29th March we noted only one company, Babcock reporting a one off £10m cost relating to Brexit with an annual £10m expense. Are UK companies underestimating the Brexit’s impact or waiting?

Some investors are not waiting. Mitsubishi UFJ sold its 5.9% stake in pension provider Standard Life Aberdeen at c.232p per share. This transaction may prove to be the trough in Standard Life. A week later, Saputo Inc announced the agreed takeover of Dairy Crest for £975m or 620p per share in cash.

But the news at Westminster, the arrival of a new party of independent MPs has focused minds. Neither party wants an exodus of members to the new centre party. The Conservative government can least afford it.

The Japanese Yen has been the main beneficiary of the “more patient” US Federal Reserve with a steadily rising trend over February 2019. 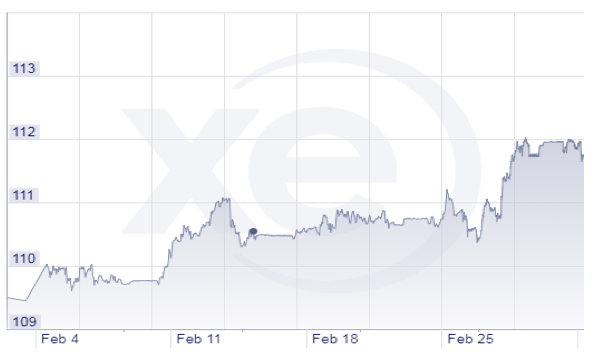 Tokyo is up despite the Yen, on talk of a GDP boost in the run up to the 2020 Tokyo Olympics.

Will Brexit hurt or help the EU? So far the main impact has been the rapid decline in EU workers arriving in the UK, increasing the EU labour pool. Looking further on the EU will lose a net budget contributor and budget disciplinarian it could increase potential Brexit political contagion. However it Brexit makes the EU far easier to run, without the UK’s constant objections and exceptions undermining the club’s rules. Longer term it will benefit EU financial centres, and increase foreign direct investment previously going to the UK.

In the short term Brexit uncertainty will impact Ireland, France and the Netherlands the most in our view. The Dutch have reported significant corporate migration from the UK.

US President Donald Trump has been pressuring his negotiating team to get to a deal with China quickly. This appears to be contrary to the approach taken by the US Trade Representative Robert Lighthizer who wants China to tackle the contentious issues of IP and software/ IT theft. China has responded by offering to buy more US soyabeans.

US investors are expecting the Sino-US trade talks to conclude soon. However the trade war issue could return with a new US effort against the EU.

The move by Kraft-Heinz to write down some of its best known brands by US$15.4bn scattered investors, with the shares falling 28%. The board said they had to recognize consumer loyalty and shopping habits had changed. Kraft also disclosed an SEC investigation. Majority shareholder Berkshire Hathaway fell sharply in response, with Warren Buffet saying he agreed with Kraft’s decision. Kraft-Heinz is a rare loss for Buffett.

The Kraft move is relevant for other food/ consumer products companies. They may well face pressure to be review their brand values/ intangible assets.