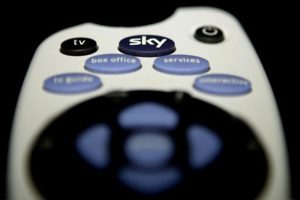 US Federal Reserve chair Jerome Powell said the pace of US interest rate rises would remain “gradual” but acknowledged the US economy had strengthened.

Global equities sold off sharply during the first week of February with the Dow registered two days of declines in excess of 1,000 points. US equities rallied after touching lows on the 8th February 2018.

Comcast gatecrashed the Sky/ Fox/ Disney deal offering 1250p cash for Sky. The Murdoch family has yet to formally respond.

Toys R Us went into administration following a VAT demand for £15m which the company could not meet. The administration will leave the Pension Protection Fund with £37m of new liabilities.

Provident Financial is undertaking a 17 for 24 rights issue at 315p per share to raise £331m. The board agreed a £172.1 provision in respect of the Repayment Option Plan.

UK blue chips endured a 240 point sell off over February after the exuberance of January 2018 evaporated as global interest rates rose. UK gilt yields rose on the view that base rates will rise in May 2018. 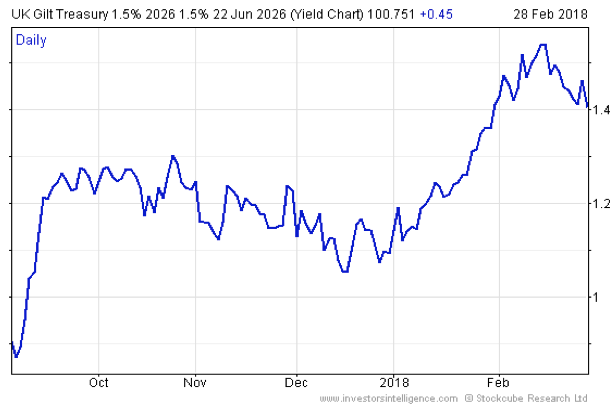 Utilities, transport and property stocks bore the brunt of the sell off with electricity and water sectors, the focus of nationalisation fears and higher interest rates.

The UK government’s struggles with its backbenchers pulling in opposite directions over the EU customs union have yet to be resolved. Politics is a key issue for sterling (which has been sensitive to comments from Michel Barnier) but less so for UK capital markets.

The demise of Toys R’ Us and Maplin on the same day underline the structural problems of high street retailers and online competition.

Both Shanghai and Tokyo stockmarkets fell sharply during February despite the lack of any real pressure on bond yields which remained subdued during February, suggesting investors were selling equities and parking the proceeds into bonds. 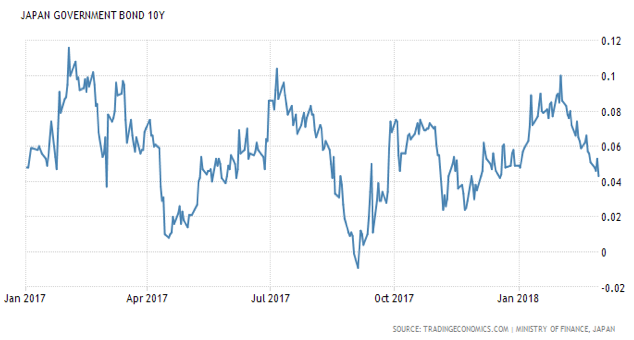 Hong Kong stocks fell 6.5% in February but staged a rebound towards the end of the month. AIA Group jumped 4.8% after the insurer reported a 48% net profit increase to 30th November 2017. Chinese billionaire Li Shufu, CEO of Geely Holding Co (owner of Volvo Cars) acquired a 9.7% stake in Daimler AG for US$9bn. The move is a first step in Geely’s “go global” strategy, and possibly aimed at securing access to Daimler’s car battery technology.

Munich Re reported a profit of €392m in 2017 due to Hurricanes Harvey, Irma and Maria but kept its €8.60 dividend unchanged.

The Euro weakened towards the end of February in response to expectations of higher US interest rates (possibly four hikes in 2018) vs Euro rates which are not expected to increase in 2018. 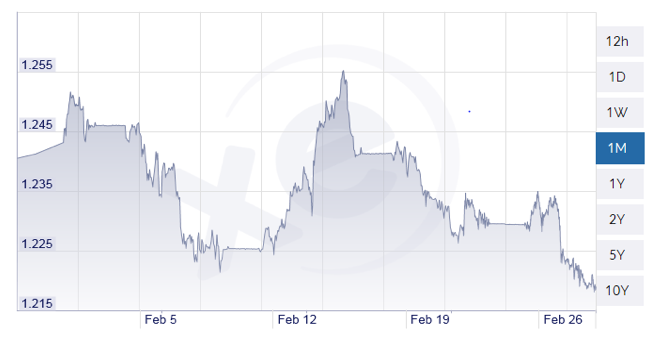 February 2018 saw the first discernable investor re-think on the Trump fiscal plan. As inflation rose and bond yields jumped, investors were finally questioning the desirability of another US government debt splurge. Interest rates will have to rise, firstly to contain inflation but also tackle the risk of overheating.

Unlike previous occasions when the US budget deficit got out of control, the current scenario now envisages more debt at a time when US debt to GDP is already 104%. The funding plan for massive $1trn annual deficits will require higher interest rates. Is GDP growth of 4% sustainable or even desirable?

Exxon Mobil reported earnings of $19.7bn in 2017 including $5.9bn of gains from lower US corporate taxes. However investors took a dim view of Q4 oil production of 4m barrels down 3% from 2016.