Despite having visited China numerous times, and being married to a Taiwanese, I had not actually heard of Wuhan before 2020. But I am now versed, thanks to the Wuhan Coronavirus.

Wuhan, the state capital of Hubei province in central China, has a population of c. 11m (> Greater London c.8.1m). It has the distinction of having been China’s capital city on two occasions, in 1927 and for ten months in 1937. Due to its prominence as a transport hub it is nicknamed “China’s thoroughfare”.

The Chinese government has put Wuhan in quarantine lockdown intending to slow the spread of the virus to neighbouring cities. This is a good first step against virus transmission, assuming the quarantine is kept in place. The government has also banned Chinese tour groups from going overseas and pinpointed the source of the outbreak, the Huanan Seafood Market in Wuhan.

A major supporting factor is China’s geography. Wuhan is c.838 km from Shanghai, 1,152km from Beijing and 919km from HK. It is c. 200 km to other large provincial cities. This factor reduces the risk of airborne viral transmission.

Whilst viruses mutate and develop resistances, the Wuhan coronavirus can jump from animals to humans (“zoonosis”) increasing its reach. Both Ebola and SARS (“severe acute respiratory syndrome”) had this capability. This increases the potential infection rate, but not necessarily the fatality rate.

Also negative is data manipulation, China’s leadership is likely to underquote the virus stats on reported cases and deaths. Due to the extended Lunar Chinese New Year Holiday these factors could create data gaps that change perceptions of the virus spread. 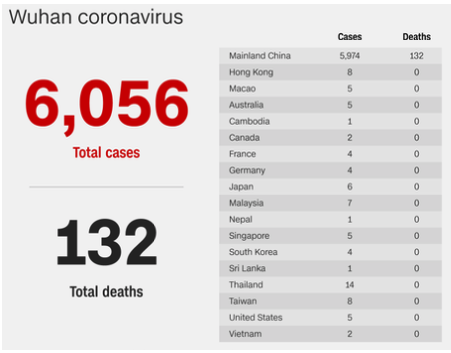 Critical factors in a scenario analysis estimating the virus’s economic impact i.e. the outcome include whether global transmission occurs, i.e. the virus spread, its duration, the effectiveness of countermeasures and the medical response as first order effects.

At this stage, both the “attack rate” (“R0”) and the incubation period can only be estimated. The attack rate or transmissibility of a virus, its reproductive number, Ro is estimated at 2.6 i.e. the number of people that can catch the disease from 1 infected person. The estimate is from a wide range of between 2x and 3.1x. The incubation period estimate is also wide from 2-14 days.

We need to consider possible economic stabilizers that may work to mitigate the GDP drag / uncertainty created by the virus. The Wuhan Coronavirus issue comprises multifactor considerations. The table below gives examples of possible outcomes to different scenarios.

It is early days but the optimistic scenario appears credible given i) the efforts to contain the virus ii) the extensive countermeasures and offsetting factors such as iii) the observed drop in crude oil prices (YTD Brent $59.50 -10.3%) and other industrial commodities (YTD Copper $5702.50 – 8.1%).

The “outcome” possibilities are credible on the basis that SARS cost an estimated 2% of China GDP. The Wuhan Coronavirus is likely to have an impact on Chinese GDP even in an optimistic scenario, of c. -1%/ -2%, in the context of a 6% growth rate.

The SARS outbreak in 2003 originated in Hong Kong and its transmission was primarily airborne. There were 8,273 cases of the SARS virus and 775 deaths, a fatality rate of 9.6% primarily amongst the elderly. The current fatality rate for Wuhan Coronavirus is c. 2.2%.

The extract below compares SARS duration and fatality curves with the Ebola virus outbreak in the DRC (a vaccine for Ebola is available). Ebola had a much higher fatality rate (66.6%) but had lower spread. This is likely due to the lower linkage between high population densities outside the DRC. 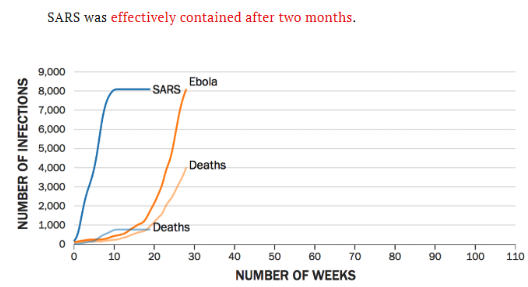 By August 2003 SARS had spread to 29 countries within a 10 week period. After c. 1 month the Wuhan Coronavirus cases have been reported in 20 other countries but without any fatalities so far outside China.

Concerns over the SARS virus impact on GDP growth led to a brief drop in Hong Kong’s Hang Seng Index (the most relevant proxy at the time) over Q1 2003. However over January to August 2003 the Hang Seng Index climbed 16.87% reversing the SARS Q1 losses and ended 2003 showing excellent returns (+34.28%).

Over the relevant period in 2003 (January to August) the Hang Seng added 16.87%. This included a tough period over January to April 2003

The SARS impact on the US S&P 500 (c. -8%) was a Q1 factor that had reversed over Q2 and had little bearing on US equity performance over 2003. As is normal where a market moving event originates outside the USA, the impact on New York stocks is muted and short-term. 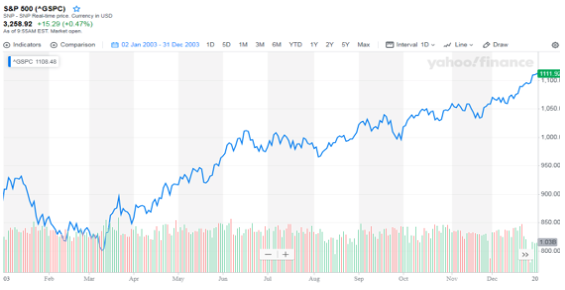 The comparison between Wuhan Coronavirus and SARS, insofar as the two events suggests:-