The 28 day suspension of cash withdrawals from the £3.7bn Woodford Equity Income Fund has crystallized issues in both the management and regulatory oversight of this large UK retail focused unit trust and other similar fund proxies.

i) The management of the Woodford funds was anomalous:-

The contrarian approach employed by Neil Woodford involved buying stakes in companies experiencing difficulties. This is generally a rather odd approach to take. In the last decade, this investing style has lost credibility and for good reason. Firstly there has been a weak relative performance of such strategies and the paucity of companies experiencing meaningful recoveries, as Woodford Equity Income itself amply illustrates.

These days, sell-offs in companies shares can go on for years, which undermines any strategy premised on a contrarian approach. When problems occur, major institutions/ hedge funds tend to “short” the company involved. Furthermore the fact that institutional passive tracker funds will re-weight holdings and sell poor performers quickly overwhelms contrarian purchase orders.

The Woodford overexposure to specific companies came with negative publicity that undermined the Woodford brand and reputation. Over 2017/ 2019 the negative stories snowballed with poor portfolio decisions receiving the full glare of publicity. It seemed that Neil Woodford was struggling to explain the rationale behind why his funds were often the largest or second largest investor in these companies. But it was the Woodford practice of topping up loss-making portfolio positions with Kier, Provident Financial, AA that magnified portfolio losses.

Source: www.ft.com
Due to the size of these holdings (often at multiples of the 3% notifiable interest threshold) it appears that the Woodford funds will have to either take a very long term view or go for a managed run down where the portfolio is liquidated over 12-18 months. The latter approach would involve recognizing the fund is unlikely to recover its original investment and holding up its hands.

Arguably some of the sell-off (position delta) in these companies has been due to the expectation of forced sales by Woodford’s funds. The chief purpose of the fund’s 28 day closure was to remove the selling pressure on investee companies. Possibly some of the current share price weakness will be reversed if Woodford is no longer perceived as a seller.

ii) The FCA “hard limit” i.e. the 10% limit rule on unquoted investments inside closed end investment funds appears to have been circumvented by Woodford.

In late February 2018 the FT reported that the Woodford flagship fund was close to hitting the hard limit which appeared to be a function of the loss of value in its quoted investments. The Woodford fund value had at that time declined from £10.2bn in May 2017 to £7.2bn by end February 2018.

The FT reported the unquoted investments were 9.47% of portfolio value at the 2017 year end but rose to 9.69% end January 2018. The FT said the FCA was well aware the fund was coming up to the 10% cap. But Neil Woodford was comfortable in not exceeding the cap because of his expectation that the unquoted companies would either list or be acquired by quoted companies.

However Citywire revealed in March 2019 that Woodford had listed some of his unquoted stakes on the “International Stock Exchange” (“TISE”) a small illiquid Guernsey based exchange. The FCA said it was in discussion with TISE regarding the circumstances behind the listings of these unquoted companies and Link Fund Solutions the fund’s authorized corporate director. Without the Guernsey listings, Woodford’s unquoted company exposure would be c. 18.4% according to Citywire.

In response to the crisis, Bank of England Governor Mark Carney has called for closer scrutiny of investment funds, “to lessen the risk of a market disrupting feedback loop”. Carney has offered a “stress test” approach to the US$80trn investment fund industry, as a means of tackling their inherent structural mismatches. These mismatches stem from the frequency at which funds offer cash redemptions and the time taken to liquidate assets in an orderly market.

Under Carney, the Bank of England is taking the view that systemic risks in non-bank financial institutions are building up. There is likely to be more oversight to ensure investment funds are not taking excessive risks.

iii) Liquidity. According to Morningstar data (31 March 2019) just prior to the crisis, the Woodford Equity income fund was holding negligible levels of cash, indeed the net asset allocation of cash was at -0.65% meaning the fund would struggle to meet net redemptions, where cash withdrawals exceed new investment funds.

This level of cash funding clearly did not envisage or allow for either significant cash withdrawals or any other negative market event resulting in weaker equity prices. The low liquidity appears to constrain any new net investment and appears strange given the need to fund expenses.

The Woodford website and other documentation makes clear the fund is not suitable for “investors who may be looking to withdraw their money in the shorter term (e.g. have an investment horizon of less than 3-5 years)”.

But this exclusion clause, begs the question of what minimum liquidity levels should be held at Woodford and similar vehicles. On this cash liquidity point there appears limited regulatory guidance. Put it this way, if Woodford were a bank, would it be allowed to disconnect its ATMs? No. The fund management industry should be in a position of being able to guarantee sufficient liquidity for withdrawals in all but the most extenuating circumstances.

The “eve” of a crisis

It is worth asking why Neil Woodford’s approach came unstuck when it did, the timing of why it has happened now four years after launch.

One factor was certainly the collapse of the Non Standard Finance / Provident Financial merger that was backed by Woodford. Major institutional shareholders did not see the merger rationale. Nor did the PRA which blocked the deal.

But the chart below illustrates why waves of selling were triggered. The fund’s performance had from March 2019 onwards started to very significantly diverge from major UK indices. Investors were differentiating the Woodford fund. 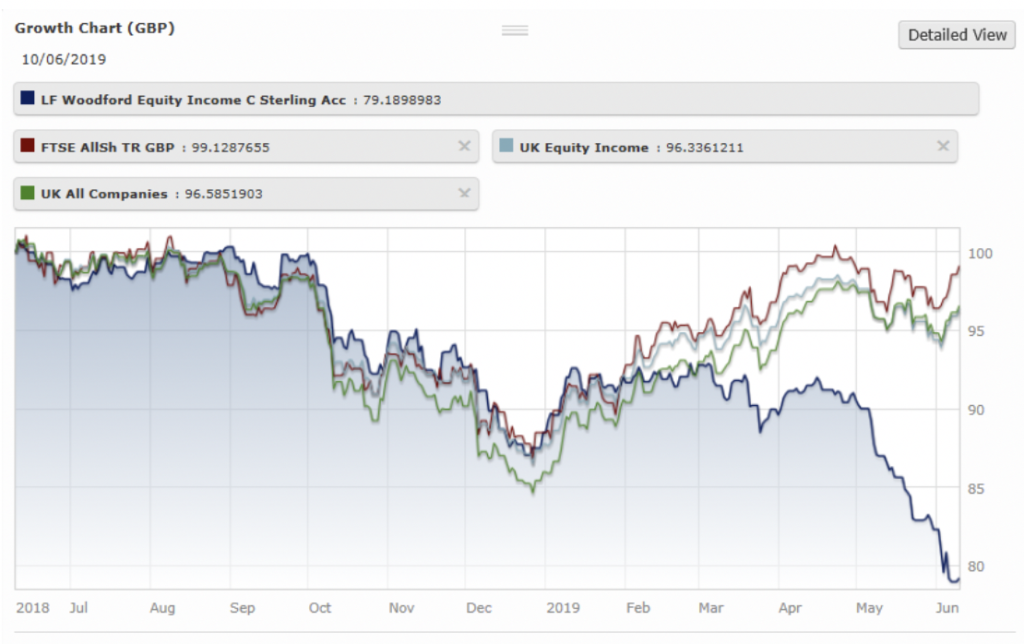 The fall-out and conclusion

The Woodford debacle brings into focus the role of investment fund platforms in recommending specific funds to retail clients. Hargreaves Lansdown has been criticized for its unbending devotion to the Woodford cause right up until suspension. The platforms share some responsibility in directing retail clients to its preferred investment funds, collecting fees in the process. Is there sufficient management of conflicts of interest and oversight of their duties towards retail clients?

As the Woodford funds accumulate liquidity ahead of the lifting of the suspension, it is tempting to suggest that the fund will swiftly meet redemptions (thought to be c. £1bn) and soldier on with a smaller fund base, recouping value over time. But that would be a lazy assumption.

The FCA should certainly have intervened, and if it had, it might have averted a problem. Retail clients that the FCA is meant to protect have been badly hurt. More stringent regulatory oversight of investment funds is certainly on the way. Perhaps this is no bad thing.

Hindsight is a wonderful thing, but it is easy to determine the other victim is the cause of “buying losers”. Woodford had filled his boots with equities that were plummeting in value that refused to rebound. Now his investors have had to shoulder the shortcomings of this approach.