The European Central Bank (ECB) has launched a QE programme involving the purchase of €1.08trn (from March 2015 to September 2016) worth of government and agency investment grade bonds. Around 20% of purchase costs will be allocated amongst European central banks and allocated according to the ECB capital key.

The ECB Governing Council led by Mario Draghi held the refinancing rate at 0.05% and the deposit rate at -0.2%. The timing of the programme, over 18 months envisages a bond purchase order of €60bn per month.

Broadly investors expected the ECB to deliver a €500bn-€550bn QE programme so this is substantially more at around €1.08trn ($1.3trn). As a comparison the US Federal Reserve’s QE programme (November 2008 – October 2014) purchased around $4.5trn in mortgage, agency and treasury bonds, it did not have a precise cap. The ECB is running a similar programme in terms of type of purchased assets but over an 18 month duration compared to the 72 month period of the US Federal Reserve.

Assuming a typical response (similar to US and Japanese QE) to this move, the outcomes of ECB QE should be:-

a) Rapid weakening of the currency, due to the impact of an increased Euro money supply and an extended period of very low interest rates.

b) Decline in high grade government bonds yields pushing investors into higher yield corporate bonds and other assets such as equities and increasing all financial assets.

c) GDP positive as investors, flush with gains from financial assets, become more active in the real economy and interest savings are passed onto mortgagees/ borrowers.

However will ECB QE be typical? No in our view, it won’t

a) The Euro has already weakened due to the widening interest rate differentials with the USD since mid 2014. (see below). Is there further downside risk? Quite possibly if US interest rates actually rise mid-2015. But what if the Fed delays further? In our view Euro weakness should not be pre-supposed due to the QE effect, as it was in Japan in 2013 for example. We view the Euro as possibly bouncing later on in 2015. 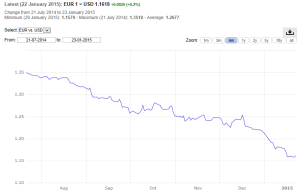 b) Does the ECB AAA current yield curve have the scope for large shifts downwards? The ten year yield at 0.537% is at near record lows already. European yields are discounting significant risks in relation to Greece and the EU periphery and we think further moves down are limited. 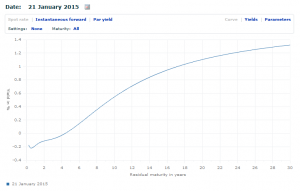 c) Will ECB QE work to stimulate GDP and inflation? No, in our view pure monetary easing in itself will do very little to stimulate the Eurozone given the limited transmission mechanisms, the lower feed across in terms of mortgage rate savings and the very depressed state of a number of Eurozone property markets. European consumers are not heavily indebted in the same way as US consumers were in 2008.

The European problem is very generational with a well off strata of an elderly and middle aged population, and a large and growing population of young and unemployed underclass. This is a feature of many EU countries and ECB QE does not address this issue, and in fairness, nor was it intended to.

We would draw a parallel with Japanese QE which launched in April 2013 with a simple goal of reaching a 2% inflation rate via ¥84 trn of annual bond purchases (¥7 trn per month). The most recent forecast from the Bank of Japan is a 1% inflation rate by mid 2015. In Japan the QE objective has not been achieved largely due to Japan’s significant structural problems.

European QE was going to be more nuanced than American and Japanese versions partly due to the legal complications of the ECB providing state aid, but also due to German reservations about re-introducing the printing press into the monetary base.

“Moral hazard” is a great part of the equation as well. European populist governments have tried hard to resist painful EU-IMF structural reforms that would reduce borrowing. By offering QE the ECB is “buying time” for the periphery, going further down the road of offering a means of delaying needful reforms. The ECB is helping countries in EU-IMF bailout programmes by ensuring interest rates in Europe remain low and the Euro remains cheap, but it does not appear to be taking on credit risk as it is limiting bond purchases to “investment grade”. This means no Greek or Portuguese bonds.

Ahead of the Greek elections this weekend, the issue remains whether the EU and ECB will tolerate a political regime that has pledged to renegotiate Greek debts and essentially default all over again. There is as yet no mechanism for ejecting a country from the Eurozone, and that is the major asset for the Greek Opposition party. Should the Greek election follow the polls there is likely to be further pressure on the EU periphery – which would act to lower bond prices.