THEMES FROM THE MONTH

*Slumping oil and commodity prices, and concerns over Russia/ BRIC instability caused gyrations in the UK 100. The index dropped to 6,182.7 on the 15th December 2014 before stagfing a 427 point rally as crude oil firmed and reassuring comments were made by the Federal Reserve.

*US GDP growth was revised to 5% in Q3 suggesting near boom conditions.

*Reckitt Benckiser demerged Indivior on a 1:1 basis to existing shareholders. The pharmaceutical group specializes in treatments for heroin addiction.

*President Obama’s initiative to end the US-Cuba trade embargo requires US Congressional approval and is already facing some opposition from the Florida based Cuban exile community. The deal could boost Miami businesses such as Carnival Corp and Sol Melia (owner of 27 Cuban hotels).

*President Vladimir Putin requested exporters repatriate US dollars. This measure and 17% overnight rates triggered a jump in the rouble ($:RUB 52.

*Afren received a preliminary bid approach from Seplat a Lagos based oil co.

*Songbird Estates has yet to determine whether to recommend the Qatari/ Brooklands revised 350p per share cash offer. The offer, which requires a 50% acceptance rate to meet its conditions, will require the acceptance of one of the large holders. Franklin Mutual has suggested to the Songbird board it either accepts the Qatari offer or secure a higher bid. 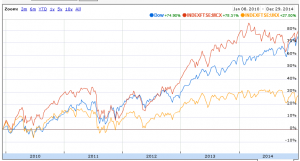 The UK 100’s relative underperformance is variously attributed to geopolitics and the higher mining/ petroleum stock weighting- in what has been a problematic year for commodity linked stocks.

Eurozone data generally points to declining inflation. Euro area annual inflation was just 0.3% in November from 0.4% in October 2014 from 0.9% in November 2013. Despite concerns over deflationary pressure the Euro has held up well v USD this month. One year on from Latvia’s adoption of the Euro, (which occurred despite 58% of its population being against joining) the tiny Baltic state will shortly assume the EU Presidency. In Q3 Latvia GDP growth was 2.1% underperforming the government’s 3.3% target.

The re-election of PM Shinzo Abe has led to only small changes in the cabinet, but the most noticeable is the appointment of General Nakatani to the defence ministry. He is said to favour enhanced strike capabilities that chime with Abe’s intention to pass a law in 2015 to reinterpret and possibly amend Japan’s pacifist constitution.

China expanded its $24bn currency swap with Russia and is providing billions in aid to Venezuela and Argentina (two championship class defaulters). There is speculation that if the Russia crisis worsens, the IMF would be unreliable and politically unacceptable, and China would be Moscow’s first port of call. But on what terms would China provide financial assistance? There might be little disclosure on this point.

2014 gains in the “social media” group happened despite limited “monetisation” of the online platforms. Facebook acquisitions (below) were based on unquantifiable future revenues and leaps of faith.

Facebook (FB) capitalised at $226bn received a “buy” recommendation from Citi with a $91 price target. This was based on a $35bn valuation of Instagram. This appears incredulous, as does Facebook’s 76.6x forward P/E. Still investors are unwilling to short Facebook, the short interest is 34.8m shares or 1.7% of issued capital.