US politics moves to centre stage

Where does one start with the 2016 US presidential race? Is this another “up in the air” high risk event? Probably not.

Trump’s nomination is proof of a Republican Party collapse. The GOP “Grand Old Party” was unable to unite its various factions leaving the field open to a total outsider. Trump mission is the Presidency. He is not there to unite the Republicans he has distanced himself from its leadership, and the Republican policy agenda. He is a symptom of deep seated problems inside the GOP.

Trump would normally be an “independent” or “third-party” candidate, similar to Ross Perot in 1992 or Ralph Nader in 2000. Trump’s hijack of the GOP for his own run makes him unique. So far near 44% of the US electorate, according to polling data appear prepared to vote for Trump in November. This is a scary “critical mass” vote that cannot be ignored.

The polling data suggests the race might be close. Trump is appealing to voters disillusioned with Washington gridlock and the same old politicians. But it is hard to generalize his precise appeal either nationally or within the party. An estimated 25% of the traditional “grassroots” Republicans have said they will not support Donald Trump. What is more difficult to gauge is the floating voter element and their views on Donald Trump.

As the June EU referendum showed, poll findings can be right on some points, wrong on others. The result was close (as predicted), the actual result was within the +/- 4% margin of error (as per normal). However the actual outcome was hard to predict because of the large number of “DK/ WNV” (Don’t Know/ Will not vote) and the high voter turnout. The betting odds were hopelessly off and influenced unsurprisingly by supply/ demand for bets.

What matters to financial markets now is the risk of a Trump presidency. This is another binary “high risk” outcome in which one arm of the probability tree “Clinton” represents “safety” the other arm, “Trump” is “high risk”. In the run up to the vote, investors are pushing the S&P index to record levels apparently unfazed by the Presidential election.

There are four key focus areas:-

The numerous gaffes, the outright stupidity of Trump’s statements most recently calling President Obama the “founder of ISIS” beggar belief. I don’t want to dwell on the minutiae of his ridiculous remarks. Needless to say Trump’s juvenile slanging matches have cemented a weak image abroad. Is he “sad, mad or bad”? Part of the Trump conundrum is he appears to be all three.

Presidential debate has been a key feature of elections going back to 1960 Nixon v Kennedy election. Trump has apparently set pre-conditions to the televised debates with Hillary Clinton that start on the 26th September. Why is he so unwilling to commit to a debate forum? Perhaps because he has little understanding of the details required for a debate. It will make good television though if it happens, an irony given Trump’s reality TV experience.

I recall reading in 1991 that Donald Trump had been rescued from near bankruptcy by his father, who had been obliged to put up fresh collateral (in the form of his own property portfolio) to prevent the US lending banks liquidating Trump’s New York assets. The following year I witnessed firsthand, on a flight from New York to Puerto Rico, the “star treatment” afforded to his then girlfriend Marla Maples. Years later, I watched an interview with Trump claiming to own firstly the freehold, then the reversion, then a long lease on the Empire State Building. He seemed confused between the ownership distinctions and at times was clearly talking out of his hat. This seemed remarkable for a guy whose core expertise was property development.

It is possible to glimpse the Trump ego by briefly skimming through “The Art of the Deal” a self-serving bio of Trump’s alleged deal making skills. We have since learned this translates to squeezing suppliers, hiring illegal labour, legal threats, getting bankers to agree debt “haircuts” under threat of default.

In property “you own a lot, you owe a lot”. Trump disclosed in June financial information two years old but has not released tax returns which he claims would not be understandable. It is fair to say Trump has staggering levels of debt that have been consistently accumulated. Trump has disclosed just $335m of debt though informed estimates put it at over $1bn. In depth analysis by Forbes has detailed numerous valuation discrepancies with a consistent theme being Trump’s underreporting of mortgage debt.

The Trump financial scenario in the context of the Presidency is hard to grasp. There have been wealthy Presidents before. One recalls Lyndon Johnson’s radio stations placed in trust and badly managed during his terms. Richard Nixon sold his properties to fund his 1968 run. This is not remotely something Trump has done, in fact his campaign has vast debt. The scale of the Trump financial issue is remarkable. The law says the President must put his assets into a blind trust for the duration of the presidency. Will Trump be able to ignore his own interests? I doubt that very much.

A benefit and drawback for Hillary Clinton is her husband, former President Bill Clinton whose charm and intelligence is in contrast to her stiffer, sterner personality. The Clinton brand is as much Bill as it is Hillary.

The two term Clinton Presidency (1993-2001) was a golden era for America (US stocks quintupled/ property doubled), it was remarkable for US productivity (largely due to the IT boom). Bill also balanced the budget. The US Federal budget was in surplus in the last two years of the Clinton term. Clinton implored the incoming Administration to keep to the discipline of a budget surplus. However President George Bush quickly cut taxes reinstalling the vast US budget deficits again. Since 2001 the US national debt has surged under both Bush and Obama.

One concern is the lack of evidence that Americans long for a re-run of the Clinton era. What are their concerns? One could be the Clinton disdain for large scale overseas military adventures despite security threats. Another could be the well-known Clinton fiscal prudence i.e. no tax cuts.

The Clintons’ main asset is they are a safe pair of hands. Hillary lacks the charisma normally a pre-requisite for the Presidency but she has the experience and expertise. We hope this will suffice against the Donald.

The candidates performance in the “swing” States?

Most pundits agree Presidential elections are won or lost in “swing” States. Despite losing the popular vote, Bush (Republican) won in 2000 after the Supreme Court handed over Florida. “Swing” states are by nature fickle. Florida went easily to Bush in 2004 but to Obama (Democrat) in 2008 and 2012. Florida’s higher Hispanic, ethnic minority population suggests an easy Clinton win in 2016.

How is Donald Trump doing in the swing States, Colorado, Ohio, Pennsylvania, Michigan, Wisconsin, Iowa, Virginia? Not well it appears. Recent polls have put Clinton well ahead in Ohio, Pennsylvania, Iowa and ahead by 1% in Florida (within the margin of error).

What is clear is Trump is not moving about enough. He has visited North Carolina (Obama 2008, Romney 2012). But a problem is Republican Governors in the swing States unwilling to openly support Donald Trump, presumably out of concern over the post-election ramifications. This is true in Ohio and Illinois. Some large Republican shoes are dropping already. Georgia usually in the Republican column last voted Democrat in 1992 is now fed up with the Republicans. Polls show Hillary Clinton comfortably ahead in Georgia. 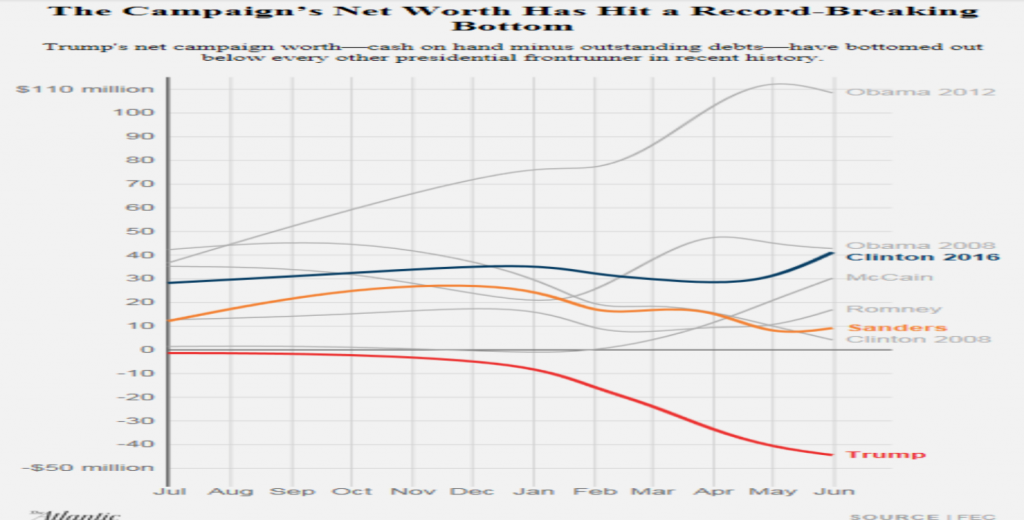 What is curious about the “multi billionaire” Trump campaign is its lack of funds. It has a low level of large donors but given this fact of life, Trump has been unwilling, so far, to put his hands in his pockets for the sort of cash required for a Presidential run. Frankly it is laughable that Trump (who loves reminding everyone of his wealth) is unwilling to inject $50m-$100m into his own campaign.

The Clinton campaign reported $30m of cash and $600k in debt. This is also a bit underfunded. Large donors have also been absent ahead of the TV blitz.

Both candidates have the lesson of Barack Obama’s well-funded campaign organization linking internet, text messaging, email, and social media with traditional TV / radio messaging. It is hard to envisage the Trump campaign’s senior management, a coterie of his children, PR “billboard” advertisers, “advance” men, members of staff reaching the Obama level of campaign sophistication. The Clinton team’s senior members have been electioneering on/off since the 1972 presidential election. I assume they know how to exploit weaknesses in their opponents’ campaign.

Campaign promises; “No new taxes” (just more of the old ones)!

This area is possibly the area voters know the least about. Donald Trump has promised:-

Donald Trump is promising a give-away budget that would be “unfunded” or met “out of GDP growth”.

Clinton’s website has 40 pages of policy positions with additional fact sheets for every proposal. These tend to build on the existing Democratic party positions but diverge away from Sanders more socialist approach.

The glaring feature of these campaign promises is their “variable” viability. Some promises totally lack viability, others will take years, a few are de-stabilizing.

As the US election moves into the period when the campaign, funding and policy details are more important, Donald Trump is sinking like a stone. It is tempting to view his election chances as remote. The Trump episode has been damaging to America and the Republicans will need a post mortem when his bubble pops. This suggests global capital markets will be steady and with normal volatility ahead of the election (assuming Clinton’s lead prevails). Fingers crossed.