China – The Next Crisis?

Is China next up in the spotlight?

Volatile Shanghai equities beg for diagnosis.  Is it profit taking or panic after triple digit returns in 12 months? Since hitting its June 12th peak (5,166.35) the Shanghai Composite Index has retreated 29.1%. At the June 12th 2015 highs the CSI 300 was up 150%, ChiNext +185% outperforming the more modest Shanghai Composite on just 100%! 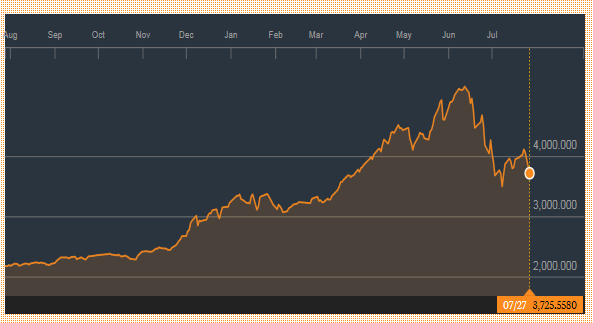 China is different. There is 80% retail “mum and pop” ownership of Shanghai stocks. The absence of major investing institutions reduces transparency and makes Chinese equities vulnerable to rumour, short-termism and portfolio margin issues. It also makes the market very sensitive to government action. This round of profit taking is deserved.

A stock purchase on margin increases debt by using the portfolio as collateral. The portfolio is essentially mortgaged. This creates a problem when mortgaged assets ie. equities decline and investors are forced to sell to maintain “loan to value” i.e. margin requirements. Chinese brokerage firms’ outstanding loans to investors for stock purchases were a record $285bn as at July 13th. Margin debt rose 50% during Q1 2015 due to speculative demand. Regulations limit margin debt availability to only portfolios in excess of CNY½m ($80k). However not all brokers follow the rules. Around 66% of Chinese active accounts hold an average of $15k with less than 1% over $1m. There are around 50m Chinese retail investors (4% of population).

China’s GDP official estimate at 6.9% (Q2 2015) is the slowest pace in 6 years but likely overstates reality by at least 3%. The official data is suspiciously similar to Politburo targets of “around 7%” for 2015. China is benefiting from the collapse in global commodity prices, cutting import costs for crude oil, iron ore and coal. But many external suppliers are saying Chinese demand is more tentative than previous years.

The re-orientation of China since 2009 away from an export/ infrastructure to focus to the consumer has reduced trade surpluses. The Americans are no longer moaning about the cheap Yuan. But as the Chinese consumer gets a bigger economic weighting, there are growing pains. The consumer is less predictable and more fragile than global export markets. There is also a need to “protect” the consumer balance sheet from evils, such as a stock market/ property crash. The Chinese financial sector is under regulated.

The Chinese government has intervened to break the slide in equity prices, using a range of weaponry, interest rate cuts, supportive comments, suspending new IPOs, outright share purchases, suspending volatile shares, making threats to imprison short sellers and requiring companies to “publish good news”. The Communists are concerned at appearing to have lost control. But these “intervention” measures are not sustainable, and are likely to exacerbate the problem. Expect further weakness in Chinese equities.