The beginning of “Brexit” 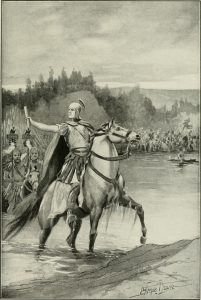 The trigger of Article 50 has happened. “Brexiteers” have been in eager anticipation for months. “Remainers” or at least this one, have been resigned to it. I am still disappointed, but it is too late now.

“You can’t always get what you want”; The Rolling Stones

Now begins 24 months of negotiations firstly over the “divorce”, secondly the UK/EU relationship going forward. The final deal will then be debated and signed off by Westminster and the EU Parliament. If no agreement can be reached, the UK will automatically leave the EU in March 2019 unless this time period is extended by mutual agreement.

The EU27 will celebrate “Brexit”. It can move forward, whether towards the much maligned “EU federalism” or a “two speed” Europe, or “multi speed” Europe, it can do so without a member state in wholehearted opposition to its agenda.

Looking back to UK efforts to stall German reunification, detailed in Lady Thatcher’s memoirs, continuing with the opt-outs to the Maastricht Treaty, for years, the UK has sought to block, obstruct, water down, negotiate away or opt out of EU initiatives including the Euro, ID cards, the Schengen agreement, environmental legislation covering clean air and beaches, EU anti-dumping tariffs, a proposed EU army. It offered no leadership and little in the way of legislative ideas of its own. It obtained a 66% refund of its contributions, something that no other EU club member obtained.

The UK’s “a la carte” approach to the EU had ostracised it long before the 2016 referendum. At the Juncker election in 2014, the UK was outvoted 26-2. Juncker led the largest party in the EU Parliament, this vote was EU democracy in action and under David Cameron, the UK was again in opposition.

Rather like America’s unilateral departure from TPP, “Brexit” will make EU management far easier for the remaining EU27.

Now begins the nitty gritty on whose rights are impacted, not just for 3m EU expats in the UK but the 1.2m UK expats in the EU, and the “right to remain” post 2019. We move from tabloid nonsense and social media innuendo and get personal. Will UK citizens be able to move, live, work and retire to the EU in the future? Maybe, maybe not, but what is clear is the automatic right to do so will be lost. It will be harder for future UK generations to retire to the sunnier parts of the EU. The race is on to get an EU passport.

And how about the competitive function that EU membership brought with it? Costs are going to rise as we bid farewell to the hardworking Polish plumber, the Latvian nurse or the Spanish cleaner who were good at undercutting higher cost UK labour (arguably the reason for the leave vote).

And what about all the things the UK takes for granted? The EU’s “Open Skies” policy that enables EU cheap travel for example? Is the UK going to set up its own system or rely on the World Trade Organisation? No-one really knows if this will be part of an agreed settlement or not.

The UK must rediscover its own place in the world, without the crutch of the EU. It must post EU exit, negotiate, operate and arbitrate its own free trade deals. The PM and others, have made this sound an easy task, but it is a lengthy and difficult process. Free trade structures may take many years to achieve. It runs counter to the UK’s transactions led ethos and relies on long term trading relationships, which require oversight and administration. Other countries want deals, we are told. Australia, for example, wants a free trade deal, but one that allows Australians easier access to live and work in the UK. That sounds familiar!

As an EU member state, any trade barrier or trade war started with an EU member state was met by a response by Brussels. The foreign country had to bargain on starting a trade war with the entire EU if it blocked goods and services from a single EU member state. This was a powerful countermeasure that prevented trade wars. It will be lost.

The UK’s export credit guarantee department is going to be far busier, arranging credit cover for UK exports in overseas locations where there is no implicit EU protection.

If Article 50 talks regress that would increase uncertainty and volatility. So might fears of a breakdown in talks and no deal. The EU has insisted the divorce terms are agreed prior to any UK / EU free trade deal. This looks like a matrimonial settlement, i.e. the contentious major items are agreed first with the easier bits later. There is plenty of uncertainty ahead. This is because both sides are after different outcomes.

The UK wants to get out of the EU scot free with a free trade deal that preserves the competitive advantage of the City of London and offers protections in other areas. The problem is the UK agreed to a €908bn EU budget for 2014-2020 back in 2013. If the EU allows the UK to renege on its budget commitments, the costs for everyone else rise immediately.

The EU wants to ensure the UK sticks to its commitments and any new deal with the UK is materially weaker than EU membership rights. It needs to ensure that other countries do not follow the UK example. It needs to put EU citizens first.

A “good deal” was initially thought to be one that retained EU single market access. But the PM in triggering Article 50 is pursuing a “hard Brexit” that will leave the UK out of the single market and operating on the basis of exclusive free trade deals (which may or may not be forthcoming, but even if they are agreed, they will not be as robust as EU single market).

The fact is the EU is under no obligation to give the UK a good deal, and it will not do so if such a deal replicates the benefits of EU membership. What does the UK have that the EU wants? A nuclear deterrent, a supportive UN Council member, a small professional UK army, collaboration on terrorism. Is this it? Is it even remotely enough? The UK does not appear to be holding many cards. 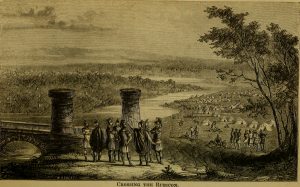 The damage to sterling’s external value during H2 2016 has yet to be reversed after many failed rallies. The typical pattern is sterling puts on impressive gains for a few days that reverse shortly thereafter. The same pattern has played out in the last week. Sterling is broadly lower today across the board, down 0.3%-0.4% against the USD and Yen. Given the uncertainty can sterling rally soon?

Recent pointers suggest Article 50 negotiations, “Brexit” uncertainties remain the dominant consideration for sterling. Are we flying blind between now and 2019 when negotiations conclude? Sterling will be sensitive to news from the EU talks.

Will the UK’s inflationary surge since the referendum help sterling? 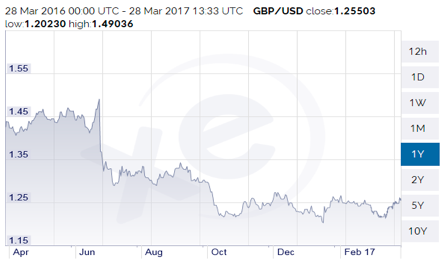 There is limited reason for sterling to rally until there is a far better sense of the UK/ EU relationship. This is especially true if the Bank of England does not budge.

Over the last 18 months, political events have impacted investor sentiment. But by their nature, referendums, elections, Article 50 triggers are waypoints. They guide our opinions but rarely do they provide concrete final answers. Recently they have led to greater uncertainty.

Specifically, what is the risk of a “no deal”, where the UK leaves the EU without paying its dues and is reliant on the World Trade Organisation?

Since last November, markets assumed that “Trumpcare”, US tax cuts and a US government splurge on infrastructure and defence spending would arrive like busses over 2017. The Trump Administration assumed that Republican control of both houses would make it easy to deprive 20m Americans of healthcare cover. Trump assumed the US Congress would dutifully fall into line. But they did not. It was an overdue reality check in an age when it has become normal to assume intended outcomes can be achieved at high speed, by might not right, without political negotiation. The problem is US blue chips, the Dow Jones specifically has run up 2,813 (20,701- 17,888) points on the assumption of easy change.

The UK government is assuming the EU wants a deal with the UK. But what if the EU wants to run an experiment and provide an example?

So now the show is on the road, there has been muted impact in UK blue chips and a “wait and see” attitude. The “Article 50” trigger has not provided a catalyst specifically.

We assume the 1972 European Communities Act will be repealed. So much for years of arguments that the EU amounted to a loss of UK sovereignty. Obviously not, because it can be all repealed by Act of Parliament.

To what extent is politics even important to markets? Last year a presenter on a Yahoo!Finance conference identified a similarities between “Brexit” and other major political events. It used an example of the Kennedy assassination (US stocks fell 3% on the 22 November 1963, rose 4% the following day and ended 1963 up 18%). With “Brexit” UK stocks were down 10% in the morning, closed down 3% and reversed losses the following day. The effect of political developments tend to be muted and smoothed out over the course of the year.

We await further developments, in what are likely to be slow protracted talks, possibly due to the complexity of the UK/ EU negotiations.

We will be looking at UK, EU and US stocks over the coming weeks in our “Brexit” focus list. If you would like to be informed first:-