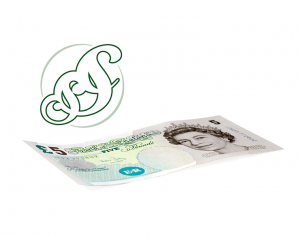 As of today, Friday 5 May, paper five pound notes will officially lose their legal tender status as the Bank of England withdraws them from circulation.
After the introduction of the new polymer five pound notes in Autumn 2016, featuring Winston Churchill, retailers and the public will no longer accept the old fivers, which featured a portrait of Elizabeth Fry, as payment or change.

The Bank of England regularly updates its notes for security specific reasons; the new polymer notes are much more durable than their paper counterparts due to their flexibility and strength. They are also expected to last up to 2.5 times longer than the previous paper notes which makes them more environmentally friendly; less notes are being printed therefore less energy is being used to manufacture them. The Bank of England has also claimed the new polymer notes are more resistant to dirt and damage making them ‘cleaner’.

Will the old retain their face value elsewhere?

A new 12-sided pound coin was recently introduced meaning the old round pound coins will be withdrawn from circulation on 15 October 2017. Until then, both will be accepted as payment in retailers.

A new polymer ten pound note is set to enter circulation in September this year and a new polymer twenty pound note by 2020. However, there are no plans for the replacement of the rarely seen £50 note.

Want to stay in the loop with the latest financial news? Subscribe to our newsletter: