Welcome to this week’s version of the CSS Weekly Review

What happened in the UK 100 last week?

Last week saw the market continue to be range bound between 6200 and 6400, where the index finished slightly down after the major U.K. Banks reported mixed results. On a similar note, we also saw the U.S. Fed Reserve leave rates unchanged.

This week is a short week for the markets, with the build-up to the Non-Farm Payrolls on Friday, this is the jobs report and will give an indication for not just the U.S. markets but also whether we are going to see U.S. Fed reserve increase rates and at what pace. 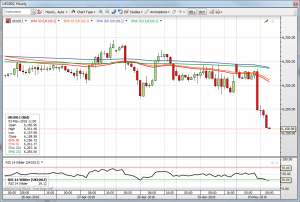 Oil continued to further its’ gains from the previous week, reaching new highs of just above $46.50. The valuation of oil began to increase on the back of news posted on the 26th April that an industry group reported a surprise draw in U.S. Crude stockpiles.

A slightly contrary piece of news was the key economic indicator, ‘Crude Oil Inventories’ data posted on Wednesday. It was reported an actual increase in inventory of 2.0M barrels, as opposed to the 1.4M forecast, this led to the slight decline in value as surplus supply was not well received.

However, it was not enough to sway Oil’s general uptrend, with price quickly recovering the same day to reach higher highs by week’s end.

Please click the image below to enlarge the U.S. Oil Hourly Chart 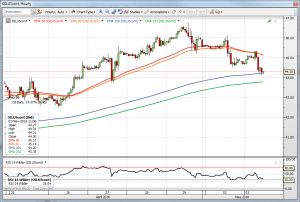 What are the major results to watch for this week?

Not sure what something you have read here means? Let us know the nature of your question and we can help explain everything to you.

I hope you enjoyed this version of the Weekly Review. Do you want to be informed on a daily basis on general stock market movements or our latest research & analysis? Subscribe to The Morning Call now.