Home › De-Mystifying the Markets › Greece: What Next? 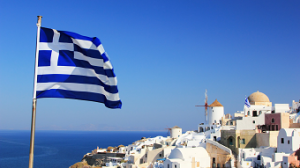 Whilst both Greek and German parliaments signalled acceptance of negotiations of the European Union – the level of bad blood on both sides suggests a “fragile” peace.

Bailouts are by nature contentious. Lenders and borrowers cannot shop around. It is not a level playing field. There has been acrimony from Greece for the EU bailouts to date, not a word of thanks. The underlying problem is Greek failure to undertake necessary welfare & structural reforms mandated in previous bailouts. That repeated failure is its single defining feature that distinguishes it from other Troika rescues (Ireland, Portugal etc). What tends to be forgotten in the Millennial age, in its rush to attribute fault as widely as possible, is the simple truth that national governments are responsible for national budgets. The EU has not changed that. Greece was unsustainable because of factors pertaining to Greece.

Almost 100 years ago, French PM Georges Clemenceau used the analogy of pressing oranges, “we will squeeze Germany until the pips squeak”. In the maligned 1919 Treaty of Versailles; the victors ensured German financial liabilities were onerous. So much so, the debt had to be inflated away via the hyperinflationary Reichsmark. The debt (a charge for repairing Europe post WW1) was never repaid. In a modern sense, Versailles was a bad bailout that “lost the peace”.

In the December 1994 “Tequila crisis” the US organised a $50bn bailout for Mexico using its oil reserves as collateral. US Treasury officials camped out at the Bank of Mexico to ensure term sheet compliance. Loath to lose its oil assets, Mexico repaid ahead of schedule, enabling the US Treasury to report a $600m profit. The “Tequila crisis” is often cited as a “good” bailout. Why? The borrower did not want to lose his collateral.

How does this bailout rate?

How does this bailout rate? It is too early to say definitively, but drawing on these historical parallels how does Greece Bailout no 3 2015 rate? Athens is geographically closer to Versailles than Mexico City. The bailout is closer too! An onerous debt of c 200% of GDP according to the IMF will result post another expected €86bn of debt in a new three year bailout. This debt load would be difficult for a financially competent country. It is impossible for Greece that has proved to be financially incompetent.

Why therefore insist on it? a) Moral hazard- debt forgiveness now, (as it did in 2010) reinforced bad behaviour as the borrower thinks there is no punishment for reneging b) No pan EU legal basis for a write-off c) Debt forgiveness should be used as a reward for bailout compliance not as a free inducement pre a bailout. d) The bilateral loan problem- it may not be up to the EU to write down inter government loans.

The €50bn asset sale (the collateral) is the soft belly of the deal. Greece has raised less than €5bn from privatisations since 2011 that were mandated in 2010. This is partly due to Greece reneging on previous privatisation promises. It is unlikely that even €25bn will be raised. Why would anyone want to buy Greek assets given its issues?

And what about the Eurosceptics…

Eurosceptics were quick to criticise the EU but what was the alternative? Greece leaves the Euro. The ECB withdraws help. €320bn odd of bad debt is crystallised. The Greek financial system remains non-functional. The Greek state having burned its bridges with international creditors creates a very weak new currency. Hyperinflation ensues. A new security problem on the edge of NATO starts. That outcome was likely, had the Greek government not capitulated and accepted the terms. I can understand why the EU has taken this course; there really was no credible alternative to “lipstick on the pig”. 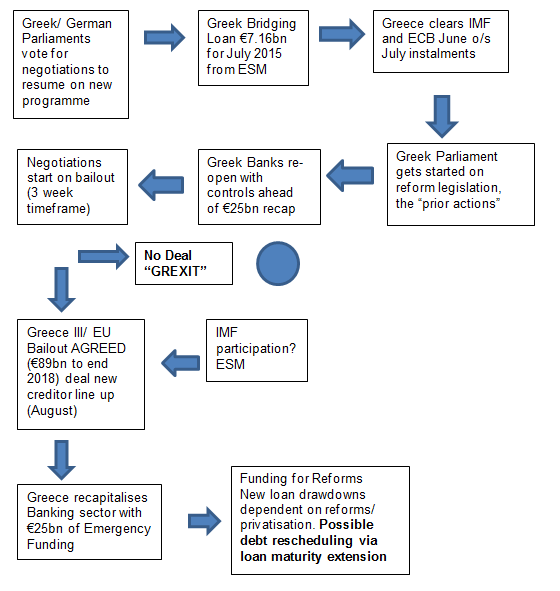 Conclusion – An important battle, but not the war, has been won

The episode reminded Europe of EMU’s “design” flaws. It involves trusting Member States to keep to Eurozone rules failing which, to then trust them to keep to bailout terms. Bailouts are funded by the “good” Eurozone members creating a dilemma in which there is no reward for rule observance. The glaring problem is there no clear process for Euro ejection. The Greek “war” must decide these points….or it will be another “Versailles”.

The IMF proposed a 30 year extension of debt maturities alongside a “haircut” of c.30%-40% to Greek debt. An extension would increase the duration and reduce the present value of Greek debt and is close to Chancellor Merkel’s “reward” based approach to “Greece III”. The new 2018 programme will be closely monitored. There are potholes ahead and Greece might not get to 2018. Significant uncertainties remain so we are cautious on the rebound in European assets.