The CSS Weekly Review – We are trying something new as an extension of our newsletter.

Alongside our Award-Winning stockmarket newsletter The Morning Call, we want to provide a little more overarching coverage of the news.

The CSS Weekly Review provides analysis on articles that made an impact during the previous week and news articles released over the weekend from various sources.

We want to begin developing The Weekly Review further than just the content below, so if you have any thoughts on what we could include in a brief weekly round up, then please let us know below in the comments! 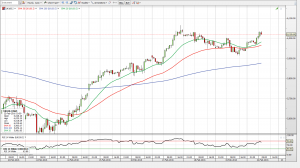 We saw a generally positive move in the UK 100 last week, closing 200 points up from where the week began. Intra-week price movement seemed to stick at around 6000-6060, price reached and then moved away from this level. Consequently, it will need to be seen whether the ‘Brexit‘ issue or Lloyds & RBS reporting this week, will push the UK 100 through this level or see the market return to recent lows.

HSBC decided to remain in London rather than return to its historic home and biggest market in Hong Kong. The bank warned that it would move 1,000 staff to Paris should Britain vote to leave the EU.

Barclays was accused of paying Qatari investors £346m in secret or “sham” payments to secure their help in the bank’s 2008 emergency fund-raising, according to a lawsuit.

Household products giant Reckitt Benckiser has predicted “tough” conditions this year after posting better-than-expected sales for 2015. The owner of brands including Dettol, Neurofen and Gaviscon tablets beat forecasts with a 6% rise in like-for-like sales to £8.87bn. A strong cold and flu season helped like-for-like sales in the health division to rise by 14%. Pre-tax profit for the 12 months to 31st December rose £82m to £2.2bn.

Shares rose 6.8% to £63.71 in Monday’s trading in London, valuing the company at about £45bn. The stock has increased by close to 12% over the past 12 months.Reckitt Benckiser said it expected growth to continue in 2016 despite a “tough” economic environment. The company, which has shortened its name to RB, said its focus on key markets and so-called “Powerbrands”, such as Strepsils and Air Wick, would help it to ride out volatile economic conditions.

Centrica on Thursday confirmed in its results statement that another 3,000 roles would be axed this year, on top of 2,000 already announced. The company, like many others, is struggling with the collapse in oil prices, which has bought wholesale gas prices down too.

As well as piping gas into our homes via its company British Gas, Centrica also has a gas exploration and production business and sells wholesale gas. The company took £1.8 billion ($2.6 billion) in write-downs last year due to falling commodity prices.

The job cuts are part of a £750 million package of cost-cutting to be completed by 2020, £200 million-worth of budget cuts are expected this year alone. Centrica follows other oil giants Shell and BP in announcing cutbacks that include extensive job cuts. Centrica is also cutting capital expenditure by £500 million this year.

BAE Systems – the defence, aerospace and electronics giant, has seen a rise in both sales and profits for 2015. Operating profit rose from £1.3bn to £1.5bn while sales increased by £1.3bn to £17.9bn. Sales were helped by the delivery of Typhoon fighter jets to Saudi Arabia.

In recent years, the company has seen a squeeze on defence spending.

BAE is also expanding into provision of cyber security for major corporations, including banks and telecoms.

What’s going to be a watch-point this week?

This section will include articles that were released over the weekend from newspapers and wires, with what news could be released that will impact some of the UK’s largest companies.

Lloyds Banking Group is in talks with the Bank of England this weekend to win approval for a payout of more than £2bn to shareholders.

Antonio Horta-Osorio, boss of the bailed-out lender, is attempting to convince the regulator that his bank has sufficient reserves to afford the payout, take another hit on mis-selling compensation and withstand a possible economic slowdown.

The Bank’s ruling will be known on Thursday, when Lloyds reports its full-year results. It is understood Horta-Osorio would like to pay about £1.5bn, or 2p a share, in an ordinary dividend and £500m or more in a one-off special dividend.

Ladbrokes and William Hill will see their annual results hammered by the first full year of paying the point-of-consumption tax, a 15% levy on online gambling profits.

Unlike internet-only operators, the two companies will also suffer from greater regulation of fixed odds betting terminals — FOBTs — which are taxed at 25% and now restricted to four per shop.

Ladbrokes will report the first statutory loss in its history after taking a huge writedown on the value of its ageing betting shops and paying an extra £40m in taxes last year. William Hill is set to report a 22% plunge in its full-year pre-tax profits after stumping up an extra £87m in tax last year.

J Sainsbury could this week seek an extension to the deadline for its £1.3bn bid for Home Retail Group after a South African rival gatecrashed the deal with a higher offer. Steinhoff International, which owns Bensons for Beds and Harveys in Britain, pounced on Friday with an eleventh-hour approach valuing the parent company of Argos and Homebase at 175p a share, or £1.4bn.

The move trumped Sainsbury’s cash-and-shares offer, which has climbed in value over the past three weeks to 167p as the supermarket’s share price has risen. Steinhoff has a sprawling empire ranging from the Paris-based Conforama furniture business to the PEP discount store chain, headquartered in Cape Town. Its biggest shareholder is Christo Wiese, the South African billionaire who controls Iceland, New Look and Virgin Active.

Two weeks ago The Sunday Times reported that he had looked at making a bid for Argos.

What companies are reporting this week?

It looks like the week ahead could be an interesting one, how will the financial sector perform?

Unsure of what some of the topics mean here? Call one of our helpful team of Account Executives who can help to explain the content on 0207 2642 360.

We hope you found our Week Review and Week Advance useful and as mentioned before, if you feel we can improve on these reviews or anything you want to see, please comment below!

If you’re new to the CSS Investments blog, please make sure you read our introduction post here to find out how this blog will help you become a better informed investor or trader.

Connect with CSS Investments on LinkedIn