British Pound Warning 2016 – The consequence of a Brexit referendum

British Pound Warning 2016 ….another “gun to the head” referendum with unpredictable consequences

The 2016 slide in sterling (-6%), punctuated by brief failed rallies is a real “Brexit” cautionary tale – a real British Pound warning. We know the EU vote will be close, we know the new Conservative government is split on Europe (nothing new there), we know the outcome will be campaign dependent.

What do we mean by British Pound Warning?

How low could the pound go? In 1985 sterling bottomed out at around US$1.03 before a covert support operation by the PM and Bank of England aimed at supporting the pound using a troupe of large investors (including the Sultan of Brunei) was engaged to buy sterling at a specific time. But a similar sterling rescue effort is unlikely to be undertaken these days. Indeed the Bank of England’s “dovish” stance on the exchange rate suggests a “laissez faire” approach that will leave the markets to set sterling.

There will be considerable uncertainty, until the outcome of the referendum is known hence sterling looks an easy short. The negative global risk environment (weak China/ weak commodities/ volatile capital markets) is a poor context for the vote and one in which pre-existing trends are exacerbated.

What we need right now is some overseas assets, preferably in hard currency. 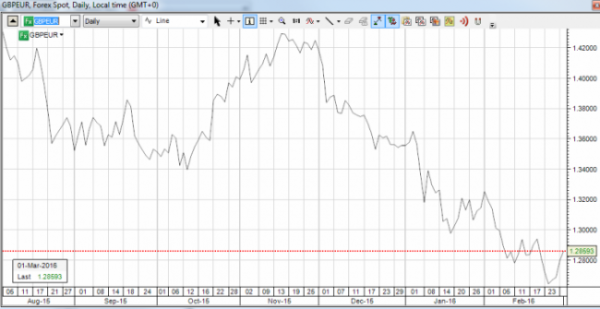 Pre-vote nervousness could possibly drag STG to €1.20 or possibly lower. If the UK votes to leave the EU, the downside risk in STG would increase. Overseas investors are likely to reconsider their sterling assets. Post-vote nervousness could possibly drag STG to €1.10. It is relevant that investors are ignoring positive interest rate differentials for sterling. The Bank of England 0.5% Base Rate compares favourably to negative ECB rates official rates at -0.4% and SNB at -0.75% and Bank of Japan at -0.1%

Our conclusion is, we are concerned about sterling in the run up to the vote. The Euro appears the safe haven currency in 2016 away from issues in the UK and USA (dealt with overleaf) whilst the US dollar looks a safe haven in H1 2016 (until the vote) but not afterwards.

US Presidential election promises the US$ equivalent in November

Donald Trump is the 21st Century equivalent of the first century Gnostic movement. Based in the remote Dead Sea area, the Gnostics borrowed heavily from early Christianity, using the new religious momentum, adopting Jesus, but using their own teachings, doing their own thing. They were the original splinter group. The early Christians, many of whom were tortured and fed to the lions by the Romans had a tough time…. they barely survived. But the Gnostics, well no-one cared, they were too remote, and not considered a threat to Rome.

Trump has borrowed/ hijacked the Republican apparatus, its banner, its core vote, but owes its right wing ideologues (Grover Norquist, the Tea Party et al) nothing. Trump is using the new medium of soundbites plus reality TV, with zero policy baggage, zero plan, zero experience.  Voters seem captivated by the simplicity of a one man band. Trump is using the party and brand for his own purposes, for free, in a novel US political experiment. If it works Trump wins, free of charge with no policy deliverables. If it fails the Republicans pick up the tab and sort the wreckage, and Tump walks away scot free. Will the Republican movement survive Trump? Yes, but in what condition?

In the past US presidents were Vice Presidents (Johnson, Nixon, Ford, Bush senior), great military leaders (Eisenhower, Grant, Taylor, Washington), US Senators (Obama, Kennedy) or State Governors (Clinton, Bush junior). Can someone with zero government experience be trusted to run the United States? This is a major departure ie pre 1776!

It is easy to point to Trump’s previous stumbles, womanising, near bankruptcy in the early 90s (he was rescued by his Dad who put up the collateral of hundreds of New York properties to secure emergency financing), the pedalling of the Trump brand and his exaggerated claims about his net worth. There is genuine difficulty estimating his net worth (estimates have come in far lower than Trump’s own claims- apparently due to Trump’s valuation of his golf courses!). In the new world of reality TV, the past / track record is of little relevance, people focus on the present and the immediate future (basically the next month). What is real, perception or nonsense becomes an endless smoke and mirrors that drags everyone in.

US GDP Q4 was revised up from 0.7% to 1%- the US economy is doing great. By supporting Trump, US investors feel they can take this risk on the chin. But what happens in November looks like a binary. If Trump is elected the US dollar safe haven could end overnight as could the US bull market. The US dollar’s appreciation against trading partners (the trade weighted exchange rate below) would reverse as investors take Trump’s rhetoric at face value. 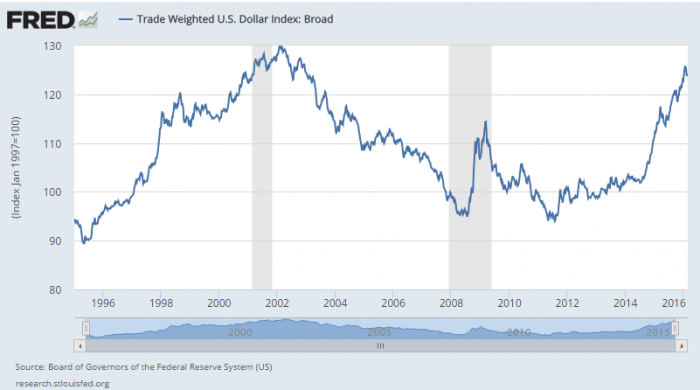 Post a Trump Presidential Election win, the USD would reverse its 5 year uptrend.