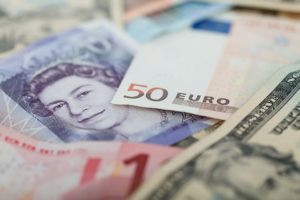 Over the past month GBP movement has been dominated by the UK general election.

The pound soared after it was revealed that the Conservatives had secured a landslide victory against the Labour Party in the 12th December election.

The pound struggled at the start of December as opinion polls indicated that the Conservative’s lead was narrowing, leaving markets jittery about the prospect of a hung parliament.

However, following the 12th December victory for the Conservatives, the Pound soared on restored clarity and hopes Prime Minister Boris Johnson would ‘get Brexit done’ by 31st January.

However, after hitting multi-year highs, the GBP/EUR and GBP/USD exchange rates started edging lower. The losses were recorded in response to Boris Johnson announcing that he would attempt to pass legislation through the House of Commons outlawing an extension to the UK-EU transition period beyond December 2020.

The euro, meanwhile, struggled throughout November and early December as the Eurozone’s flagging economy continued to dampen market appetite for the single currency.

US-China trade developments also continued to drive the US Dollar, with rising ‘phase one’ trade deal hopes weakening some of the safe-haven appeal of the ‘greenback’.

The Federal Reserve also announced that it would leave interest rates on hold amid uncertainty over the global economy heading into next year, leaving many US Dollar traders locked in a ‘wait and see’ mode.

Once again Brexit will remain in focus over the month ahead, with Boris Johnson set to attempt to rule out any extensions to the UK-EU Brexit transition period beyond next year. Consequently, we will likely see GBP weaken on heightened fears of a no-deal Brexit, with tensions between the UK and the European Union expected to intensify.

Meanwhile, euro investors will be focusing on the Eurozone’s economic data, with any hints of a failing German economy proving EUR-negative.

US Dollar investors will be paying close attention to US-China trade developments this month, with any signs of a ‘phase one’ trade deal between the two superpowers being inked before the New Year likely weakening USD as traders flock to riskier assets.