The pound has plummeted to new multi-month lows against both the euro and US dollar in the past couple of weeks, although it has managed to claw its way back higher as UK political tensions began to ease. 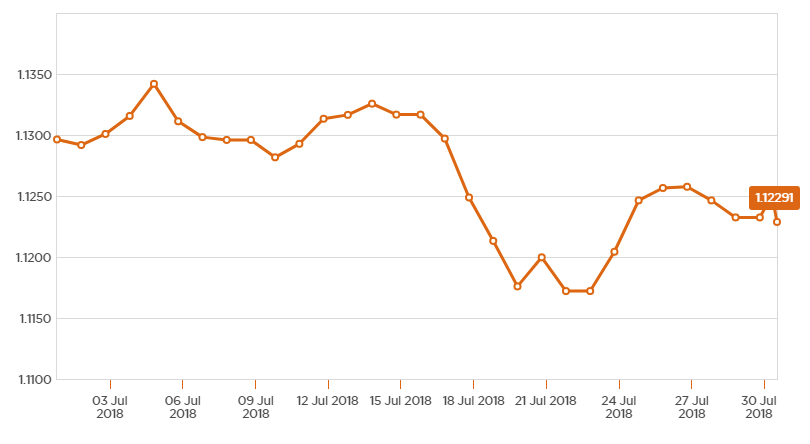 For the pound, the last couple of weeks have been shaped by a run of lacklustre UK economic data as well as some mixed signals regarding Brexit.

Sterling faced substantial losses in mid-July, striking a new multi-month low as the UK’s latest wage growth, inflation and retail sales figures all printed below expectations. This has shaken confidence in the belief that the Bank of England would raise interest rates in August.

Prompting further volatility in the pound have been the recent ups and down in Brexit, with Theresa May’s decision to take charge of negotiations being undermined somewhat by the EU’s rejection of her customs proposals.

Last week saw Sterling faring better against the euro however, with the EUR exchange rate being weakened by some weak PMI figures and a dovish policy meeting by the European Central Bank.

Meanwhile the US dollar continued to climb against both the pound and the euro over the past couple of weeks due to growing trade uncertainty.

The only real hiccup for USD came as President Donald Trump criticised the strength of the US currency, blaming it on the Federal Reserve’s policy of aggressive monetary tightening.

Pound investors are currently awaiting the conclusion of the Bank of England’s policy meeting later this week and are likely to be reluctant to alter their positions in the currency before the bank makes its August interest rate decision.

The meeting is widely expected to result in the BoE voting to raise interest rates by a quarter of a percent to 0.75%, but analysts warn of a possibly muted impact on Sterling should the bank’s accompanying policy statement be dovish in tone.

The Federal Reserve will also meet this week for its own policy meeting, prompting investors to focus on the US dollar.

While no policy changes are expected from the bank, the Fed’s forwards guidance is likely to bolster USD sentiment if it indicates two more rate hate are on the table for the second half of 2018.

Finally a flurry of Eurozone data could strengthen the euro this week, although the single currency could tumble again should trade tensions between the EU and the US flare once more over the next couple of weeks.

Currencies Direct are available to talk currency whenever you need, so get in touch if you want to know more about the latest news or how it could impact your currency transfers.

Since 1996 Currencies Direct have helped more than 210,000 customers with their currency transfers.